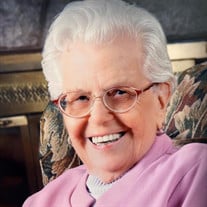 Dorothy Jean Pugmire, 98, of Logan, Utah, passed away 11 March 2022. She was born 28 May 1923 in Paris, Bear Lake County, Idaho, to Jonathan Rich Pugmire and Ellen Athay Budge Pugmire. Jean grew up in southeast Idaho, spending her summers at the family farm located on Antelope Flats, in the hills east of Bear Lake, and the winters in Paris, Idaho. Jean’s first four years in school were difficult, because she could not talk plainly and few took the time to try to understand her. Her brother, Frank, was the only one who learned her language and was often her interpreter. In the fourth year of school, the whole family moved to Logan so she could have a special teacher and attend the Whittier School. This experience changed her life. In 1944 Jean joined the WAVES. She was discharged in 1946 with the rank of Mailman Second Class. Jean graduated from Utah State University and Merrill Palmer Institute in Detroit, Michigan. She received a Master’s Degree from the University of Michigan, and an EdD from the University of Maryland. Jean taught kindergarten in Provo and Logan City schools. From 1953-54 she left Logan for one year to teach second grade for the Army Dependent School in Tokyo, Japan. In the fall of 1954 she was assigned to teach second grade at The Whittier School in Logan, thus completing the circle and giving her the opportunity to assist those children with the greatest needs. Her college teaching experience started in 1955 with a year at the College of Southern Utah in Cedar City. This year was followed by 28 years at Utah State University. Jean Pugmire ended her formal teaching career as a full Professor of Education. In 1963 she was chosen Teacher of the Year by the Utah State University Student Education Association and from 1954-65 was a Teaching Fellow at the Institute for Child Study at the University of Maryland. In 1968 she was Director of an NDEA Institute, teaching teachers of Indian children in Blanding, Utah. She served on the Utah Board of the Association for Supervision and Curriculum Development from 1962-77 and was state President from 1972-73. She also served on the Utah Board of the National Association Education of Young Children from 192-77 and was state President of this organization from 1971-72. After retiring, she spent 15 years at the Cache Refugee Center, working with Vietnamese and Cambodian immigrant families. She also served on the College of Education Advisory Council for Utah State University, and served on the Whittier Community Center Board of Directors. Jean Pugmire held positions on the boards of the Parent and Child Guidance Programme, Cache County Mental Health Association, Cache County Migrant Council, Advisory Council of Bear River Community Mental Health Centre, Utah State Advisory council for Mental Health, and was appointed by the Governor to the Utah State Board of Mental Health. In 1995 Jean was awarded to the Distinguished Alumni Award form Utah State University for her work at the university, her community education efforts, and for her humanitarian work with refugees. She was preceded in death by her parents; three older sisters, Alice (Robert John) Evans, Nancy Helen (G.B.) Crawford, and Ruth (Floyd L.) Carter; an older brother, Franklyn Budge Pugmire; and one nephew. She is survived by three nieces and two nephews. A graveside service will be held at Logan City Cemetery Friday March 18 at 11:00 am. Condolences to the family may be expressed online at www.allenmortuaries.net. Arrangements by Allen-Hall Mortuary.

The family of Dorothy Jean Pugmire created this Life Tributes page to make it easy to share your memories.

Send flowers to the Pugmire family.