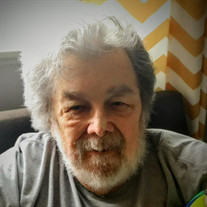 Edward “Murphy” McGuire of Guttenberg New Jersey passed away peacefully in Cache Valley, Utah on June 22, 2021. He was born on September 9, 1939, to Ann Hyde-Matula and George McGuire. Stepson to Rudolph “Rudy” Matula. Being the baby, he was the pride and joy of his family. He would often tell stories of how he was so loved by his sisters and never had to do anything for himself. Ed met and married Mary Lagville-Sogluizzo in December 1967, becoming a stepfather to Mary’s two sons John and Michael Sogluizzo. They were married until her passing in 1976. In 1984 Ed married Irene McCoy Mandell and shared his life with her and her five children Marty, Allen, JoAnn, Mark, and Sandra until her passing in 2013. Ed joined the service in 1964 at the age of 25 where he was a Radio Operator. After leaving the service Ed worked for Charles Men’s Wear, he was a volunteer Fireman and ended his working career as a mail carrier in West New York, New Jersey. Ed retired from the postal service in 2001, he loved to go to Hudson County Park with friends eating donuts and telling stories. After the passing of his wife Irene, he stayed in New Jersey with his sister Marion until her passing in 2016. Ed then started a great new adventure out west which was very fitting as he loved a good western. He moved to Cache Valley Utah, in June of 2017. During his time in Utah Ed continued to live his best life in retirement with his Grandson and his family, eating donuts and drinking coffee. Ed is survived by his stepchildren, nieces, nephews, grandchildren, and great grandchildren who loved him madly and will miss him dearly. Ed was proceeded in death by his parents Ann, George and Rudy, wives Mary and Irene. siblings Catherine “Katy” (William) Buchman, Thomas (Elizabeth “Betty”) McGuire, Anna “Anne” (John) Connolly, Margaret “Peggy” (Mark) Fusco, Marion (Mario “Busky”) Cellitti, Theresa “Tessie” (John) DeSimone and stepson Allen Richard Mandell. The family would like to thank all the nurses, doctors, and social workers that showed so much compassion in his final days. A special thank you to the inpatient Hospice care ward at Logan Regional hospital for fulfilling Ed’s final wish to pass peacefully with no pain. In lieu of flowers, please donate to your local fire department, VA or Macular Degeneration Research Foundation, in Edward’s memory.

The family of Edward "Murphy" McGuire created this Life Tributes page to make it easy to share your memories.

Send flowers to the McGuire family.