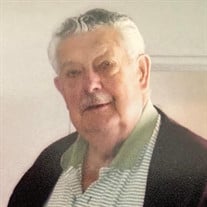 Ed passed away peacefully on the evening of 20 January 2021 of natural medical causes. He would have been 94 on March 2nd. He was born on March 2nd, 1927 to William Edwin Pehrson and Laura Alvina McAllister Pehrson of Logan Utah. He was the third of four children. He was a Veteran of the Second World War having served in the Navy and the Pacific Theater. He achieved an Associate Degree in Mechanics. He married Laura LuDean Naef in the Logan Utah Temple on September the 1st of 1950 and they shared 70 happy years together. The couple had four children, Steve, Scott, Sidney, and Susan. Ed served the City of Logan as a Fireman for 33 years (1951 – 1984) achieving the ranks of Assistant Chief and Battalion Commander. Ed loved, above all, his family and was always there for them. He loved to paint in his later years and became quite accomplished in this hobby. He had a passion for building model sailing ships. These large intricate models would require months to build. These are highly prized by his two surviving sons. In his younger years, he loved the outdoors and would hunt and fish, motorcycle and 4-wheel, camp, and snow ski. Many are the fond memories with Dad and the family on these great outdoor excursions. He was a hard worker and a flawlessly honest man. These traits he passed on to his children. He was a gifted carpenter and built the home he lived in and raised his family in. He also built many treasured pieces of furniture for his children. He was preceded in death by his parents, two sisters, Laura Ludean McLain and Myrtle Dixon; Sidney Pehrson, a son who died shortly after birth; and Susan Pehrson, a daughter. He is survived by LuDean Naef Pehrson, his beloved wife; A sister Laura Fonnesbeck; a son Steve Edwin Pehrson (Kami) of Roosevelt, Utah; and a son Scott William Pehrson (Mamiko) of Atlanta, Georgia; and 7 grandchildren and 4 great-grandchildren. Funeral services are under the direction of Allen-Hall Mortuary. A viewing will take place Tuesday, January 26th from 11:30 to 12:30 with funeral services beginning at 1:00 at Allen-Hall Mortuary, 34 East Center Street in Logan. Interment will be in the Logan City Cemetery. Services will be livestreamed and may be viewed at: https://us02web.zoom.us/j/83734819295?pwd=emFyY3lUTkRuQlNEMXFaWlNjcERSdz09 Password: Edwin

Ed passed away peacefully on the evening of 20 January 2021 of natural medical causes. He would have been 94 on March 2nd. He was born on March 2nd, 1927 to William Edwin Pehrson and Laura Alvina McAllister Pehrson of Logan Utah. He was the... View Obituary & Service Information

Send flowers to the Pehrson family.