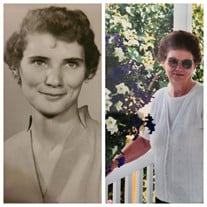 Eilene Smith Kunz Law passed away in North Logan, Utah on February 18, 2022. She was born to Frank and Lela Josephine Smith in Randolph, Utah on October 26, 1934. She graduated from Randolph High School. She was called to serve in the Los Angeles California Mission. Eilene married Charles Clark Kunz on December 21, 1962 in the Logan Temple. She was an active member of The Church of Jesus Christ of Latter Day Saints and served as a librarian, served in the Primary as a president and teacher, served in Sunday School as a coordinator, secretary, and teacher, also served in the Stake Sunday School as a secretary, served in the MIA as a secretary and teacher, and served in the Relief Society as a teacher. Eilene and Charles served as Temple coordinators to assist ward members to attend the Logan Temple. She loved being apart of The Daughters of the Utah Pioneers and served as the county president and in many other positions throughout the years in the DUP. Charles and Eilene enjoyed scenic drives through the Bear Lake Valley, they traveled to over 20 states including going to Canada. She was a Utah Jazz enthusiast. On October 16, 1999, Eilene married Ray George Law in the Logan Temple for time. They traveled to Alaska, Nauvoo, and to places around the Bear Lake Valley that she had never been to and enjoyed camping together. Eilene and Ray served at the Paris Tabernacle to give visitors guides. She is survived by her children Russell (Jacquelyn) Kunz and Shelley (Calvin) Patrick, and her grandchildren Samantha, Kyle, Cheyenne, and Cierra. Along with her sister Nadene, brothers, Delbert & Marvin, and many nieces and nephews. She is preceded in death by her parents, her first spouse Charles, her second spouse Ray, and her brother Albert. Funeral services will be held February 26, 2022 in the Bern Ward Church at 12:00 pm with a viewing at 10:00 am and burial in the Bern Cemetery. The funeral will be livestreamed and can be accessed by clicking on the following link: https://us02web.zoom.us/j/88226916550?pwd=cTBLTVpjWmFlL2RHZTQ2ZWRwUGgrdz09 (password: Law)

Eilene Smith Kunz Law passed away in North Logan, Utah on February 18, 2022. She was born to Frank and Lela Josephine Smith in Randolph, Utah on October 26, 1934. She graduated from Randolph High School. She was called to serve in the Los Angeles... View Obituary & Service Information

The family of Eilene Kunz Law created this Life Tributes page to make it easy to share your memories.

Send flowers to the Law family.