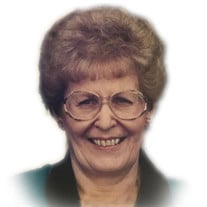 LOGAN, Utah - Our sweet wife, mother, grandmother and great grandmother, Elizabeth (Betty) Mae Luthy Cressall, passed away on Feb. 14, 2018, at the age of 86 in Logan, Utah. Betty was born March 18, 1931, in Logan, Utah to Emil August and Freida Miller Luthy. She and Calvin C. Cressall were married on September 4, 1948, in Evanston, Wyoming. They were later sealed in the Logan LDS Temple. As a member of The Church of Jesus Christ of Latter-day Saints, Betty served faithfully in many callings. She worked with the scouts as a Den Mother, served as Primary President, counselor in the Relief Society, and as the bishop’s wife. She will be greatly missed by her family. She is survived by her husband, Calvin, and their children: Craig (Carolyn) Cressall, Paul (Karine) Cressall, Don (Pamela) Cressall, Scott (Jolene) Cressall; 22 grandchildren; and 44 great-grandchildren. She is also survived by her sister and brothers: Linda Forsberg, Melvin, David and Howard Luthy. She was preceded in death by her brother, August; sisters, Ruth, Golda, Flora, Eleanor, Bertha; daughter, Baby Cressall; great-granddaughter, Aspen Cressall. Funeral Services were held for the family on Tuesday, Feb. 20, 2018, at Allen-Hall Mortuary, Logan, Utah. The family would like to express their love and appreciation to her granddaughter, Lindsey Cressall for her tireless care of Grandma the past several years.

The family of Elizabeth Mae Luthy Cressall created this Life Tributes page to make it easy to share your memories.

Send flowers to the Cressall family.