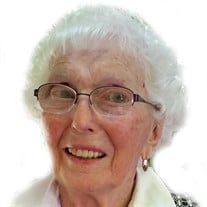 Elizabeth Aebi Erni passed away at home on January 4, 2020 of myelodysplastic syndrome. She was reunited with her eternal sweetheart, Theophil Erni, who died in 2010. She was 95. She was born in Heimiswil, Bern, Switzerland on March 24, 1924, the only child with Gottfried Aebi and his third wife, Elisabeth Fuchs Aebi. She immigrated to the United States on the original ship Queen Mary in March of 1950, in order to join her fiancée who had obtained employment in Idaho Falls, Idaho. They were married on October 13, 1950 in the Idaho Falls Temple and eventually settled in Logan. They were blessed with a daughter and three sons. They and their spouses are: Christine Erni Lord, Martin and Darlene (White) Erni, Konrad and Rosie (Mueggler) Erni, and Bernard and Gina (Olson) Erni. She has 11 grandchildren, 18 great-grandchildren and one great-grandchild on the way. Elizabeth loved to explore the world. Although her favorite vacations were to her beloved cabin “Edelweiss” at Bear Lake or camping at Tony Grove, she also made many trips back to her homeland of Switzerland. She enjoyed trips to New York City, Cleveland Utah, Washington state, and Georgia to visit with her children and their families. She also traveled to Florida, Mexico (including Cancun and two cruises), Hawaii, Alaska, California, Las Vegas, Yellowstone, and the Grand Tetons. When Swiss relatives came to visit her in America, she and her family toured the western United States with them. She felt that travel provided the best educational experiences for her and her family. Elizabeth earned a degree in horticulture from a school in Switzerland and passed her certification exams there. She had a remarkable “green thumb.” Her orchard, vegetable and flower gardens were enviable. For many years, she also planted and cared for a flower garden at the 5th-18th ward meetinghouse. She enjoyed sharing her produce and flowers with neighbors, family, and friends. She and her husband were longtime Cache Valley Garden Club members. Although raising her family was her first priority, Elizabeth also was employed by JCPenney, Utah State University, and the Church of Jesus Christ of Latter-day Saints. After retirement, she spent hours crocheting or knitting afghans for family, friends, and patients at Sunshine Terrace. She also crocheted bandages for lepers, made countless hats for cancer patients at the hospital, and baby booties and hats for newborns in her ward. Throughout her lifetime, she pursued various educational endeavors and cultural activities. When she arrived in Logan, she taught herself English by comparing the German and English versions of the Heidi story. In 1959, she passed the exam to become a naturalized citizen of the United States and was proud to be sworn in as an American. She and her husband taught ballroom dancing for many years to youth and adults in the Cache East Stake, and helped execute regional dance festivals and Gold and Green Balls. She enjoyed attending concerts, plays, and sporting events, especially those involving her children and grandchildren. She was an excellent cook and loved to share her Swiss cookies and ethnic foods with family and friends. Elizabeth was an avid reader and attended numerous community and USU Extension classes, including USU’s Senior University. Even though she had low vision, Elizabeth was an avid reader and learned to use an iPad. Lifelong learning was an important aspect of her character. Even though she suffered from serious health conditions, Elizabeth did not let them interfere with her daily walks around the neighborhood or, during inclement weather, in the Cache Valley Mall. Elizabeth is survived by her four children, grandchildren, great-grandchildren and a sister, Verena Aebi Stalder. She was preceded in death by her husband, her parents and her siblings: Rosalie, Karolina, Jakob, Roeseli Aebi Fries, and Fritz. Funeral services will be held on Saturday, January 18th at 11:00 am at the North Logan Allen Mortuary Funeral Home, 420 E. 1800 N., North Logan, Utah. A viewing will be held at the mortuary Friday, January 17th from 5:30 pm to 6:30 pm and from 9:00 am to 10:30 am prior to the service. Interment will be in the Logan City Cemetery. Special thanks go to her primary care physician, Dr. Stephanie Thomas, her nurse care manager, Melissa Coppack, and their staff, and to the medical personnel at Logan Regional Hospital and Budge Clinic. She loved going to the Infusion Clinic where the staff became like family to her. Appreciation also goes to Sunshine Terrace Home Health and Hospice for care at the end of her life and to her friend and aide, Angella Campbell. Condolences may be sent to the family at www.allenmortuaries.net.

Elizabeth Aebi Erni passed away at home on January 4, 2020 of myelodysplastic syndrome. She was reunited with her eternal sweetheart, Theophil Erni, who died in 2010. She was 95. She was born in Heimiswil, Bern, Switzerland on March 24, 1924,... View Obituary & Service Information

The family of Elizabeth Aebi Erni created this Life Tributes page to make it easy to share your memories.

Send flowers to the Erni family.