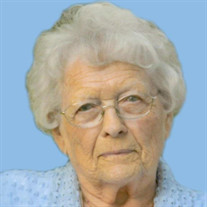 Ellen Peterson Balls passed away Friday, March 6 at Sunshine Terrace in Logan, Utah. She would have celebrated her 102nd birthday on May 15 of this year. She grew up in Amalga, Utah, daughter of J Leslie and lIarene Peterson. She attended schools in Amalga, Smithfield and North Cache High. Upon graduation from high school, she lived with her grandmother Ellen Peterson in Logan and it was during this time she met her future husband, Clin A. Balls. They were married in the Logan LDS Temple on September is, 1937. They made their home in Hyde Park and became parents of 4 children. They were married 53 years before Dad's death in March, 1991. In 1953 Mother began working at JCPenney Co. A few years later she was employed at Cache Valley Select Sires and became Office Manager until her retirement in 1983. Two years after Dad's death she moved to Logan and a few years later to Spring Meadow in Smithfield where she resided until her health made it necessary to enter Sunshine Terrace in 2016. Mother was a life long member of the LDS Church and served in various callings throughout her life. Her love for and devotion to her family were foremost in her long life. She helped care for her elderly parents and Dad's parents in their later years. Mother had many talents - among them being an excellent cook and seamstress. She loved her flowers, gardening and all types of handwork. Most all grandchildren and great grandchildren were warmed by her crocheted blankets. The last few years she embroidered over 50 sets of dishtowels she gave to family and friends. Reading good books was a special joy to her. After retiring Mother enjoyed spending time with family and also her good friends, traveling, attending musical productions and the game days together. She was preceded in death by husband Clin in 1991, son Mark in 1998, and daughter-in-law Isabel in 1995 and son Leslie in Dec. 2018. She is survived by daughter lIarene (Orlo) Jones, Danville, CA and youngest son Alma (DeAnn) Balls, Logan and daughter-in-law Laura Balls, Salt Lake City; 17 grandchildren, 56 great grandchildren and 16 great-great grandchildren; and her sister Marjorie Smiley of Cloverdale, CA. She leaves her family and those who knew her a legacy of love and strength, courage and determination through the last difficult months of her long life. The family wishes to express their deepest appreciation for the professional support and compassionate care and kindnesses shown to our beloved Mother and Grandmother during her health struggles the past few years. Graveside service will be on Thursday, March 12, 2020 at 12 pm at the Hyde Park Cemetery. A viewing for family will be at 11 a.m. at the Allen Mortuary of North Logan, 420 E 1800 N. Condolences and memories may be shared with the family online at www.allenmortuaries.net

Ellen Peterson Balls passed away Friday, March 6 at Sunshine Terrace in Logan, Utah. She would have celebrated her 102nd birthday on May 15 of this year. She grew up in Amalga, Utah, daughter of J Leslie and lIarene Peterson. She attended schools... View Obituary & Service Information

The family of Ellen Peterson Balls created this Life Tributes page to make it easy to share your memories.

Send flowers to the Balls family.