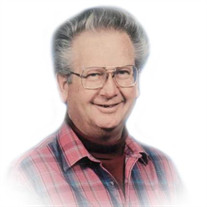 Elmer Jorgensen Kingsford passed away peacefully at home on January 22, 2021. Elmer was born Sept 9, 1936, in Logan Utah. To Ellis Ormond and Merl Jorgensen Kingsford. He married his wife of 61 years, Eva Ann Heaps, on August 21, 1959, in the Salt Lake City Temple for time and all eternity. Elmer grew up in Grace Idaho and completed his early childhood and secondary education there. All of Elmer’s life he showed an interest in biology, specifically the study of insects. He attended Brigham Young University, Hawaii, and Brigham Young University, Provo, eventually graduating from Utah State University with a Bachelor of Science degree in Entomology in 1966. He relocated his family to Oroville, California where he took a position as the lead biologist for the Butte County Mosquito Abatement for 11 years. In 1978 he returned with his family to Cache Valley where he worked for Logan City Mosquito Abatement District until his retirement in April 2002. Soon after his retirement, Elmer and his wife chose to serve a mission for the Church of Jesus Christ of Latter-Day Saints, and was called to serve in the Nauvoo Illinois Mission. They faithfully served as Site Missionaries, Tour Guides in historical Carthage Jail, served as Temple Workers in the Nauvoo Temple, and Elmer lent his skills as Editor for the Nauvoo Rendezvous Program. After an honorable release from their mission Elmer and his wife Eva Ann both served for many years as Temple Workers in the Logan Utah Temple, and later as service missionaries in the LDS Employment Office. Always one to serve where needed he contributed his skills and free time to his Chosen Faith and his community. He was an outstanding advocate for Boy Scouts of America and served in many positions such as Cub Master, Scout Master and Merit Badge Counselor for a wide range of badges, and Scout Council Commissioner, thus creating many opportunities for quality experiences while helping his own two sons through the scouting program. Elmer was fond of woodworking and could be found spending many hours with his son, “both before and after his mission”, cutting lumber on Todd’s portable sawmill. Elmer raised four children, Tracie Heaps Kingsford, Todd Kingsford, Jody Lynn Taylor and Annel Seamons. He currently has 12 grandchildren, and 13 great grandchildren. Elmer is preceded in death by his parents Ellis and Merl Kingsford, his Sister Gwendolyn Page and Daughter Jody Lynne Taylor. Elmer will be greatly missed for his quick wit, sense of humor, knowledge of the gospel, extensive work and experimentation with plants and gardening and being the best Husband, Father, Brother, Example and Friend, anyone could ever have. Some of our fondest memories of him will be chasing butterflies and grasshoppers through the alfalfa fields with nets, or standing next to him by the water trying to figure out why he could catch 3 times as many fish as we could while using the exact same bait. There will be a big vacancy in the lives of all those who were associated with him. We await the time when we will join him as an eternal family. The family would like to thank the great staff of Intermountain Homecare and Hospice for helping Elmer transition through this phase of life surrounded by his loved ones. Also, we express gratitude to all those who have had a part in helping in any capacity. There will be a viewing at Allen Mortuary of North Logan located at 400 East 1800 North, North Logan, UT on Friday, January 29, 2021, from 6-8:00 PM, for those who would like to attend. Family only graveside services will be held on Saturday, January 30, 2021 at 12:00 noon. In lieu of flowers his family has ask that you donate to your favorite humanitarian aid in Elmer’s name.

Elmer Jorgensen Kingsford passed away peacefully at home on January 22, 2021. Elmer was born Sept 9, 1936, in Logan Utah. To Ellis Ormond and Merl Jorgensen Kingsford. He married his wife of 61 years, Eva Ann Heaps, on August 21, 1959, in the... View Obituary & Service Information

The family of Elmer Jorgensen Kingsford created this Life Tributes page to make it easy to share your memories.

Elmer Jorgensen Kingsford passed away peacefully at home on January...

Send flowers to the Kingsford family.