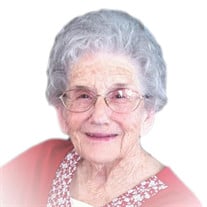 Emily Brooks Pope, age 98, passed away peacefully March 13, 2017, at Legacy House in Logan, Utah. She was born Aug. 26, 1918, in St. George, Utah, to Flora Morris Brooks and George Brooks Jr., the fifth of nine children. She attended school in St. George, where she excelled in theater and drama. She completed her education at Brigham Young University in English and theater.In 1941 she was called to serve a mission in the Eastern States Mission, and although her mission was cut short after the death of her father, she made lifelong friends, one of whom became her eternal companion. She married Vance Pope on June 27, 1942, in the St. George LDS Temple.Mother and Dad spent the first years of their married life on a dairy farm in Park City, Utah. Later they owned and operated farms in Arbon Valley and Arimo, Idaho, and co-owned a cattle ranch with Dad's father and brother-in-law near Monida, Montana. After they were no longer involved in farming, they bought and managed a motel in Jackson Hole, Wyoming.In 1981, Mother and Dad accepted a mission call to serve in the Texas San Antonio Mission. It was definitely a highlight of their lives. After their return, they moved to Logan, Utah, and then to River Heights, Utah, where Dad passed away Sept. 30, 2006.Mother was a faithful member of The Church of Jesus Christ of Latter-day Saints. She served as stake Primary president, ward Relief Society president, Junior Sunday School coordinator, and in innumerable teaching positions. She was a master teacher. After they moved to Logan, she and Dad served many years in the Logan LDS Temple.Mother is survived by her children: Kathleen Pope of St. George, Utah; Shirley (Dennis) Slack of Mt. Pleasant, Utah; Sandra (Glenn) Biddulph of Logan, Utah; Michael (Jalene) Pope of Salem, Utah; Curtis (Annette) Pope of Burley, Idaho; Flora (Clark) Howard of Panguitch, Utah; Barbara Oyler of Providence, Utah; and D'On (Marvin) Allen of Salt Lake City, Utah. She is also survived by one sister, Flora Mitchell of Salt Lake City, Utah. She leaves a posterity of 40 grandchildren and 122 great-grandchildren. She was preceded in death by her husband, Vance; four sisters: Anna Taylor, Maggie Stucki, Helen Anderson and Olive Esplin; three brothers: Lee Brooks, Morris Brooks and Waldo Brooks; a son-in-law, Joe Oyler; a daughter-in-law, Mary Pope; two grandchildren and two great-grandchildren.Funeral arrangements are under the direction of Allen-Hall Mortuary. Funeral services will be held at noon Saturday, March 18, at the River Heights 3rd Ward chapel, 465 N. 300 East, in Providence. A viewing will be held from 6:30 to 7:30 p.m. Friday at Nelson Funeral Home, 162 E. 400 North, in Logan, and from 10:30 to 11:30 a.m. prior to services at the church. Condolences may be expressed online at www.allenmortuaries.net.Our family would like to thank Ana, Mother's hospice nurse, and the nurses and staff at Legacy House for their patient and loving care of our mother.

The family of Emily Pope created this Life Tributes page to make it easy to share your memories.

Send flowers to the Pope family.