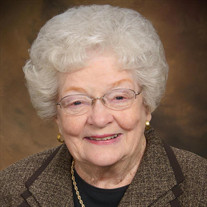 Emma VerNae Cragun Hansen, 89, peacefully passed away and was reunited with her sweetheart Keith on January 28, 2021 as she was surrounded by her loving children. She was born in Smithfield, UT on Oct. 11, 1931 to Thomas Marlin and Laura Potts Cragun at the home of her grandmother Emma Johnson Cragun. She weighed only 4 ½ pounds and they kept her warm in a shoebox on the coal stove warming oven. She was the baby sister of Paul and Jack Cragun. VerNae lived in Smithfield until age 5 when her family moved to Logan. She attended Adams Elementary and Logan Jr. and Sr. High schools. While in school, she was active in track (100 and anchor leg of the relay team), softball (1st base) and band where she played the clarinet. She was also a girl scout and picked fruit and vegetables to earn money for her school clothes. She earned her Golden Gleaner Award and is grateful for what she learned from the program. While at Logan High she met the love of her life, Keith D. Hansen, in the summer of 1946 at band practice. Keith would give her rides on his bike that had balloon tires. He would pump her to Central Park to ice skate, take her back to her house and then ride back to his house. It was a total trip of 12 miles each day. They were later well known for the red scooter that replaced Keith’s bicycle and became known as the “scooter couple”. She worked at Logan Laundry and Sears while Keith was on his 2 year church mission. After his return, they were married and sealed 6 weeks later on Aug. 20, 1951 in the Logan temple. Keith was drafted into the US Army 2 weeks later. She joined him in Augusta, GA in Jan. 1952 and they lived there for 2 years. VerNae has always been very active in many organizations such as PTA, Logan JayCee Civic Club and was the Chairman of the North Logan Dairy Princess Pageant for 14 years. She held many church callings serving in the Primary, YW, RS and as the Ward & Stake Extraction Director. She was a member of the Daughters of the Utah Pioneers in the Ralph Smith Camp and served as the Company President and Captain. She had four generations of ancestors that were Daughters of Utah Pioneers. She also loved serving with Keith as a Logan Temple officiator for 12 years. She bottled and canned everything she could get her little hands on, sewed most of the clothing that her children wore and she loved to make hand dipped chocolates for her family each Christmas. She also made a special Danish treat called croquettes that the family would hoard if they were given the chance. VerNae set a special goal of making a hand pieced quilt for each of her 7 children and her 27 grandchildren and finished this goal a few years ago stitching her family together with love. To help support raising their seven children, she sold Tupperware, MaryKay Cosmetics and Magic Mill Bosch Mixers. After retiring from the USU Bookstore as a bookkeeper in 1990, she had one more lifelong goal to fulfill. As a couple, they served an LDS senior mission in Sofia Bulgaria in 1991-1993. Keith and VerNae enjoyed many trips throughout Canada, Mexico, Australia, Europe, Asia and also flying in their plane to many places in the US. She also enjoyed water and snow skiing, boating, fishing, and camping in their camper and then later in their 5th wheel trailer. She was proud that she could slalom ski from land and end back on land without getting her hair wet. They also looked forward each summer to camping and golfing at the Star Valley Ranch in Wyoming. She is survived by her children: Susan (Reed) McGregor (Logan, UT), Craig (Heidi) Hansen (South Ogden, UT), Donna (Doug) Brady (Overton, NV), Dale (Debbie) Hansen (Hyde Park, UT), Nancy (Val) Potter (North Logan, UT), Bryan (Stephanie) Hansen (Nibley, UT) and Shari (Jim) Hall (Providence,UT), 29 grandchildren and 46 great grandchildren. She is also survived by a sister-in-law Dorene (Norman) Squires and a sister-in-law Sharlene Hansen. We express appreciation to the caring staff at Maple Springs of North Logan, her hairstylist Joann Larsen and the wonderful care received from Dr. Brad M. Goates over the years. We are also grateful for the hospice care of Encompass Health and special caregivers Arlene Staley Robbins and Shawna Blanchard. Arrangements are under the direction of Allen-Hall Mortuary. Private family funeral services will take place Saturday, February 20, 2021 beginning at 11am at the LDS chapel located at 2600 North 1650 East in North Logan with a private family viewing prior at 10am. Interment will take place in the North Logan Memorial Cemetery. Services will be livestreamed and may be viewed via the following link: https://us02web.zoom.us/j/87520960258?pwd=azRMdklQTFJGVjl1TTdxK1ZxYlpTdz09 Password: Hansen

Emma VerNae Cragun Hansen, 89, peacefully passed away and was reunited with her sweetheart Keith on January 28, 2021 as she was surrounded by her loving children. She was born in Smithfield, UT on Oct. 11, 1931 to Thomas Marlin and Laura Potts... View Obituary & Service Information

Emma VerNae Cragun Hansen, 89, peacefully passed away and was...