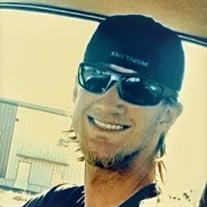 Eric Hall Brenchley (30) of Wellsville, UT passed away September 16, 2020 from congestive heart failure. He was surrounded by his family and friends in the comfort of the home he grew up in. Eric was born August 3, 1990 in Logan, Utah. His parents are Blake Arlyn Brenchley and Sindy Lee Brenchley. He has three brothers Jerrimy Blake Brenchley (Jessica Brenchley) A. Justin Brenchley (Marley P. Brenchley) Curtis William Brenchley (Alyssa Brenchley.) He attended Wellsville Elementary, Willow Valley, and graduated from Mountain Crest High School in 2008. Eric had many friends of all ages; he was a social butterfly everywhere he went! He married Whitley Leatham in 2013 and later divorced. They had two children Rebyl Erica Brenchley (his angel in heaven) and Thatcher William Brenchley. He later met Molly Winchester (Stanworth) and they were in a relationship to the end. After high school, Eric worked with his brothers in construction for a few years. He then switched to concrete and later found his last job working at a dairy farm. Eric mostly had outdoor hobbies such as horse riding, dirt biking, hunting, camping, and fishing. He was well known for his infectious smile! Eric is survived by his son Thatcher William Brenchley, his parents Blake & Sindy Brenchley, his grandparents Arlene Hall & LaDaun Brenchley, his siblings Jerrimy (Jessica), Justin (Marley), Curtis (Alyssa), his nephews and nieces Kloey, Wyatt, Kyler, Kapree, Karson, and Eli. Predeceased by his daughter Rebyl Erica Brenchley, his grandparents Arlyn Brenchley & Bill Hall, his uncle Terry, and his cousins Terra Hall & Kylie Johnson. There will be a viewing in his honor Monday September 21, 2020 from 5-7 pm at Gunnell park 65 south 300 east Wellsville, UT A service will be held at Gunnell park Tuesday September 22, 2020 at 11am, with a viewing prior from 9:30-10:30am. His final resting place will be at the Wellsville Cemetery. Donations can be made to an account at Logan Medical Federal Credit union listed under Sindy Brenchley. We know Eric is at peace with his baby girl! He spoke to her in his final days and we can only imagine the beautiful reunion in heaven when she jumped into daddy’s arms! Fly High Cowboy!

Eric Hall Brenchley (30) of Wellsville, UT passed away September 16, 2020 from congestive heart failure. He was surrounded by his family and friends in the comfort of the home he grew up in. Eric was born August 3, 1990 in Logan, Utah. His parents... View Obituary & Service Information

The family of Eric Hall Brenchley created this Life Tributes page to make it easy to share your memories.

Send flowers to the Brenchley family.