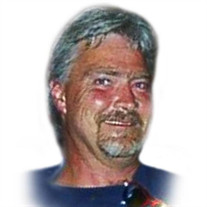 Eric Ray Swenson passed away on January 4th, 2021.He was born on February 17, 1967 to Stan and Trudy Swenson. He was raised in Nibley, Utah. Growing up Eric was quite rambunctious. Him and his friends tended to terrorize our neighbors and the whole town of Nibley in general. It seemed serious at the time, but now we can look back and laugh at the random fires set, occasional doughnuts in the church parking lot, and all those poor mailboxes. At a young age, Eric met Elizabeth Herd, They were a couple of young crazy kids having the time of their lives. They later married and had Jeremy Ray Swenson. Eric and Liz later divorced, but they remained good friends until the end. Eric then married the love of his life on May 17, 1991. Stephane McCombs Swenson was the most beautiful person inside and out that he had ever met. They shared many happy times. They had three sons, Jordan, Gage and Ryker. Their time spent together living in Garland felt like Heaven. They were so happy and such a sweet little family. Eric’s favorite role in life was that of being a father. He loved his boys very much and all he wanted was to be the best dad he could. He was very proud of all four of them, and they gave his life great fulfillment and love. Eric had a smile wherever he went. Since his death, many people have reached out and told many stories of his kindness and contagious laugh. He was truly a gentle giant. He could never hurt a soul. Eric never met an animal he didn’t love. He was known as the animal whisperer because of his ability to pet any animal, no matter how wild. He had a soothing calmness about him, and Eric never raised his voice. He had many pets throughout his lifetime, but one in particular was extremely close to his heart. Prancer the pomeranian was with Eric for the past 13 years. He was his little buddy and Eric took him everywhere he went. Prancer was with him when Eric passed, and somehow knowing that makes his passing a little easier. Eric was extremely close to his mom. They had a special bond and took care of each other. When Trudy passed, it was very hard on him. That is when he lost the spark in his eyes. He missed her very much and she was waiting for him with open arms. He was also reunited with his son, Jeremy Ray Swenson. He had a huge place in his heart for Jeremy, and his death also hit Eric hard. Eric was a great man with a huge heart. He will be sorely missed. We love you Swiggy. Eric was survived by his sons, Gage, Jordan and Ryker Swenson, his brother Cory (Ginger) Swenson, his sister, Jen (Brady) Swenson, his grandmother, Larue Wilcox. He was also survived by 7 grandchildren. There will be a small family service on Saturday.

Eric Ray Swenson passed away on January 4th, 2021.He was born on February 17, 1967 to Stan and Trudy Swenson. He was raised in Nibley, Utah. Growing up Eric was quite rambunctious. Him and his friends tended to terrorize our neighbors... View Obituary & Service Information

The family of Eric Ray Swenson created this Life Tributes page to make it easy to share your memories.

Send flowers to the Swenson family.