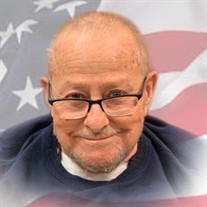 Estle L. Smith passed away on September 1, 2021, at the Cache Valley Assisted Living Center. He was 85 years old. Estle was born in Hyrum on October 22, 1935, to LaVon and Ruby Mauchley Smith. He was the youngest of 4 children LaRae Jorgensen (deceased), LuDean Hugie (deceased), and Joy Smith (deceased). Dad graduated from South Cache High School in 1953. Shortly after high school, he joined the Army and was a paratrooper. He served two years for his country. On February 21, 1957, Dad married Darleen Olson in the Logan temple. They had three children – Greg (Sue Ann), Shari (deceased), and Mike (Debra). After the Army, he worked at various jobs until he started working at Thiokol/ATK in Promontory, Utah. Dad worked in the data control department in the Test area for over 38 years, until he retired after 38 years. Dad loved camping, hunting, and bowling with his family. Dad bowled in National Bowling Tournaments around the country and received recognition for twenty-five years of participation. Estle had many friends in the bowling community. Dad was also an avid Utah State Aggies fan. He had season tickets for basketball and football games for many years. He also enjoyed watching the Utah Jazz. Estle is survived by his two sons, 14 grandchildren, and 13 great-grandchildren. Dad was preceded in death by his wife, daughter, parents, and siblings. We want to thank the entire Cache Valley Assisted Living staff for all of the love and care they did for him over the last couple of years. We will celebrate his life on Wednesday, September 8, 2021, at noon at Allen-Hall Mortuary, 34 East Center Street. Logan, Utah. A viewing will be at Allen-Hall Mortuary on September 7, 2021, from 6 – 8 pm and the funeral day from 11 am – noon. Interment will be at the Hyrum City Cemetery. Condolences and memories can be shared with the family at Allen-Hall Mortuary, www.allenmortuaries.net

Estle L. Smith passed away on September 1, 2021, at the Cache Valley Assisted Living Center. He was 85 years old. Estle was born in Hyrum on October 22, 1935, to LaVon and Ruby Mauchley Smith. He was the youngest of 4 children LaRae Jorgensen... View Obituary & Service Information

The family of Estle LaVon Smith created this Life Tributes page to make it easy to share your memories.