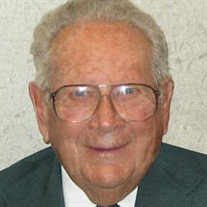 Gilbert Eugene Haycock, age 93, passed away February 21, 2020, incident to age. He was born July 8, 1926, in Cardston, Alberta, Canada to Gilbert Floyd and Ruth Schaub. Being raised during the depression, his family moved a lot trying to find work. At 2 years old they moved from a farm in Canada to Utah, then New Mexico, and then California. Gene worked from a young age doing paper delivery and other odd jobs. He graduated highschool, then was drafted. After 2 years of service in the Navy in WWII he started his education and worked hard, graduating from USC in 1952 as an Architect. During the summer he worked for his uncle Schaub, an engineer, in Logan. While playing softball, he fell in love with Alice Duersch and they were soon married on Dec. 15, 1950 in the Logan LDS Temple. Dad designed many buildings in the valley : Romney Stadium, Logan Rec Center, Middle Schools, Beaver Mtn Lodge, Logan Airport, Elks Lodge, and many LDS Churches like the “Golden Toaster”. His favorite design was his home with the Hyperbolic Paraboloid roof, known as the glass house built in 1967. Dad was honest and strived to always do his best. Dad took us on many vacations, always visiting family on the way. He joined the RC club having fun with the guys flying remote control airplanes. He built 11 of his own. They fulfilled many callings in the Church of Jesus Christ of Latter Day Saints. Dad enjoyed many years as a Scout leader. Both served as Temple Workers for 10 years. They raised us with a good foundation of the gospel in our lives. He is survived by his wife of 69 years, sisters Janice Smith and Marilynn Garlock, and 5 daughters: Bonnie Jean Chambers, Dixie (James) Johnson, Nancy (Terry) Lingman, Mary (Dave) Champlin and Julie Ann (Bart) Roylance— also 26 grandchildren and 50+ great grandchildren. He was preceded in death by his parents, his brother Dick Haycock and sister Renee Gomes. Funeral services will be at 12 PM on Tuesday, March 3 at the Edgehill Ward Chapel, 262 Canyon Rd in Providence. A viewing will be held on Monday from 5-7 PM at Allen-Hall Mortuary, 34 E Center in Logan and from 10:30-11:30 AM prior to services at the church on Tuesday. Burial will be at the Providence Cemetery. Condolences and thoughts may be expressed online at www.allenmortuaries.net. Special thanks to all the emergency responders and the Logan Regional Hospital staff. We feel our Father was treated with love and respect.

Gilbert Eugene Haycock, age 93, passed away February 21, 2020, incident to age. He was born July 8, 1926, in Cardston, Alberta, Canada to Gilbert Floyd and Ruth Schaub. Being raised during the depression, his family moved a lot trying to... View Obituary & Service Information

The family of Eugene Haycock created this Life Tributes page to make it easy to share your memories.

Send flowers to the Haycock family.