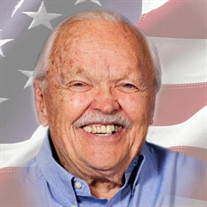 Eugene Cecil Kartchner passed away at his home in Logan, Utah on March 7, 2021 at the age of 94. Eugene was born on July 2, 1926 in Butte Montana and was the oldest of five children born to Jesse and Hazel Kartchner. He had many fond memories of his childhood growing up in Butte and liked to share them with his family. He attended Butte High School for two years until the family moved to Ogden, Utah in 1942. He finished high school at Ogden High and attended one year at Weber College before his military service in World War II. After his military service, he met and married Margaret Hutchinson on April 16, 1954 in the Salt Lake Temple. Eugene and Margaret had many adventures traveling together and have been to all 50 states as well as several different countries throughout the world. Education was an important part of Eugene’s life. He was a lifelong learner who always seemed to have a book with him, and he spent a lot of time going to school to earn several advanced degrees. He received an associate’s degree from Weber College and then attended the University of Colorado where he received two bachelor’s degrees—one in engineering and another in business administration. From 1953-1956, he attended the University of Utah and received a master’s degree in accounting and a master’s of business administration. He then went on to receive a PhD from the University of Washington. Upon completion of his doctorate degree, Eugene moved his family to Logan, Utah and taught business and computer science at Utah State University for 31 years. He taught alongside his brother Allen in the Business Administration department, and Eugene enjoyed the opportunity to work so closely with his brother. Eugene was awarded Professor of the Year at USU in 1993 and retired in 1996. Eugene had a deep love for his country and enlisted in the United States Army in 1944 during World War II. He attended basic officer training, officer candidate school, and flight school to become an artillery observation pilot. He was released from service in December 1946 and then recalled to active duty in 1951 during the Korean War. During his military service, Eugene achieved the rank of First Lieutenant and was awarded the Air Medal with four Oak Leaf Clusters, the Korean Service Medal with two Bronze Service Stars, and the United Nations Service Medal. He showed his love for his country by wearing his WWII-Korea Veteran baseball cap and by waking his family up with John Phillip Sousa marches on early mornings during camping trips. During his growing up years and other interim periods during his life he worked as a paper-boy; ice delivery man; crop duster; fire fighter in Yellowstone; sheep herder and camp jack; construction company manager; city planner in Ogden, Utah; accountant for Utah Oil Company, a meat packing company in Arizona; uranium claim surveyor in Colorado; and a uranium stock broker in Las Vegas. He served on the Logan City Planning Commission, oversaw Business Week at USU, provided Cub River Irrigation company with its’ water distribution cards, and flipped his famous sourdough hotcakes at the 5th Ward pancake breakfast for years. In 1970, he and Margaret purchased a farm in Lewiston, Utah which they owned and operated for 40 of the years they have lived in Logan. The farm became an opportunity for Eugene to share the value of hard work with his family, friends, and neighbors when many of them worked there during summer days. Eugene was an active member of the Church of Jesus Christ of Latter-day Saints and served in many callings throughout his lifetime. He served as a branch president of a USU student branch and has been in bishoprics and on high councils. He spent many years as a ward finance clerk and later as a stake finance clerk in the Logan Central Stake. Family has always been one of the most important blessings in Eugene’s life. He loved his family fiercely and he treated everybody he came in contact with like they were family. He had a way of making everyone feel loved and special. Eugene loved getting together with his children, grandchildren, and great-grandchildren. He loved his siblings and their children and enjoyed visits with them. Eugene and Margaret have 5 children: Kathy (Dale) Wyatt; Margene (Lynn) Bowler, Kevin (Sandra); Jayme (Richy) Anderson; and Sean (Dianne). They have been blessed with 21 grandchildren and 23 great-grandchildren. Eugene was preceded in death by his parents, his brother Garde, and his daughter Kathy. A viewing will be held Friday, March 12, 2021 at Allen-Hall Mortuary, 34 East Center Street in Logan from 6-8 pm. Funeral services will be held on Saturday, March 13 at 1:00 in the 5th Ward Chapel, 502 East 300 North, Logan with a viewing from 11:30-12:30 am. Interment will be in the Logan Cemetery. Services will be livestreamed and may be viewed online via the following link: https://us02web.zoom.us/j/86848409439?pwd=YmwyQU5kckE5VUpXUEZHOEROeUpWQT09 Password: Kartchner The Kartchner family would like to extend their deepest gratitude to the caregivers at Intermountain Homecare and Hospice as well as the caregivers at the Gossner Cancer Center for the loving service they provided during the recent months.

Eugene Cecil Kartchner passed away at his home in Logan, Utah on March 7, 2021 at the age of 94. Eugene was born on July 2, 1926 in Butte Montana and was the oldest of five children born to Jesse and Hazel Kartchner. He had many fond memories... View Obituary & Service Information

Eugene Cecil Kartchner passed away at his home in Logan, Utah...

Send flowers to the Kartchner family.