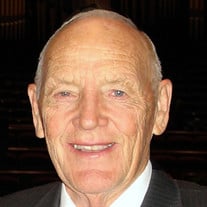 Evan N. Stevenson Obituary   Evan Noel Stevenson, 87, passed away peacefully at home on Wednesday, August 20, 2014. Our beloved husband, father, grandfather, brother, uncle, and friend will be greatly missed.   Evan was born March 27, 1927 in Eureka, Utah, the son of Evan Glenn and Camille Osborn Stevenson. He married Jean Hall on June 22, 1951, in the Logan, Utah LDS temple. They are loving parents to four children: Debra (Scott) Raymond, Gary (Lesa) Stevenson, Merilee (Val) Averett, and Doug (Kimberly) Stevenson.   Evan spent his younger years in the Idaho Falls area. Upon graduation from Ucon High School, he served in the US Navy. He spent a year at Ricks College and then accepted a call to the California Mission. Much of his mission was spent in the desert of Arizona among people he dearly loved. He attended BYU where he met Jean at a "matinee dance." Marriage, graduation and employment took them to Idaho Falls, Seattle, and Ogden, Utah.  He began his professional career at Utah State University in 1955 as director of the Student Union Building and coordinator of student activities. During those years, Evan and Jean rarely missed an activity, particularly the student events and big band dances that were held in the student union ballroom, now named the Evan N. Stevenson Ballroom. In 1967, Evan became director of auxiliary enterprises at USU. In 1980, he was appointed vice president for administrative affairs. His work with USU athletics and campus planning were favorite assignments. He continued his educational goals and received an MBA from USU in 1967, and his doctorate in educational administration from USU/Arizona State University in 1971. While at USU, Evan worked to foster favorable relationships between the university and the community. He was president of the Cache Chamber of Commerce and belonged to the Jaycees and Kiwanis Club. He was the recipient of the USU Faculty Service Award, the Logan Jaycees Distinguished Service Award, and in March of 2014, the USU Distinguished Alumnus award.   After retiring from the university in 1991, he launched a second career as a consultant and board member of Wasatch Property Management where he received the Wasatch Investor of the Year award in 2012. Evan, an Idaho farm boy at heart, is an owner of the famous Cache Valley landmark Dr. Pierce’s barn and adjoining farm. He played an important role in the restoration and preservation of the barn. Throughout his life, Evan was a faithful member of The Church of Jesus Christ of Latter Day Saints. He was a gifted teacher and student of the scriptures. He loved and inspired the youth of the church. His church service included five years on the LDS Church Correlation Committee. He served as bishop, stake president’s counselor, and patriarch. He was an officiator in the Mesa LDS Temple. Together, Evan and Jean served a mission to the Mesa Family History Center. He was always an example of righteousness and hard work. Evan and Jean found great joy in their son Gary's service as the Presiding Bishop of the LDS Church. One of Evan's outstanding characteristics was his love for people. At every stage of his life, he extended a hand of friendship to all with whom he came in contact. If you knew Evan, you were his friend.   Evan, above all else, loved his family – including his extended family and in-laws. He is survived by Jean, his wife of 63 years, his four children, sister, Joanne (Harold) Kapp, brother, Brent R. Stevenson, as well as 20 grandchildren and 30 great-grandchildren. He is preceded in death by his parents, sister, Betty Priest, brother-in-law, Vernon Priest, brothers, Richard Stevenson and Jerry Stevenson, and his son-in-law, KC Barton. Funeral services will be at noon Monday, August 25, 2014 at the LDS Stake Center, 1550 North 400 East, North Logan, Utah. Friends and family may call from 6 to 8 p.m. Sunday at Allen-Hall Mortuary, 34 E. Center, Logan, and from 10 to 11:30 Monday prior to services at the church. Interment will be in the Logan City Cemetery.     In lieu of flowers, the family kindly suggests contributions to the LDS church general missionary fund.   Memories and condolences may be shared with the family online at www.allenmortuaries.net.

The family of Evan N. Stevenson created this Life Tributes page to make it easy to share your memories.

Send flowers to the Stevenson family.