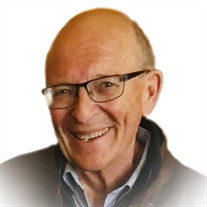 James Frank Hatch Brown, “Frank”, peacefully passed away at home on July 23rd, 2021 at the age of 83 due to kidney failure. Frank was born on July 6th, 1938 to Delilah Hatch Brown and Frank H. Brown in Lovell, WY. He loved everything about growing up in the Big Horn Basin and often serenaded us with the Wyoming state song. After finishing his education in Lovell, he graduated with his undergraduate and MBA from Brigham Young University. Frank served a full time mission for the Church of Jesus Christ of Latter Day Saints in the East Central States where his Father was mission president. He treasured this time spent with his parents and the associations he formed. Frank married Jo Katona on December 18, 1968 in the Salt Lake Temple. They enjoyed many years in Fairbanks, Alaska were he worked as the Personnel Director for the University of Alaska, Fairbanks. They welcomed two daughters and their small family enjoyed many excursions into the interior of Alaska. In 1976, Frank began his job in Ames, Iowa as the Director of Personnel at Iowa State University. It was in Ames that their two sons were born. Frank and Jo always counted themselves lucky to have raised their family in the heartland, surrounded by so many great people for 22 years. In 1997 Frank and Jo moved to Logan, Utah where Frank worked for Utah State University until retirement. He was a patient and kind father and husband. A dedicated family man and follower of Christ. We always knew that we were loved and he showed that unconditionally. He served in many capacities in his community and church and was respected and admired by so many. He was a lifelong Boy Scout and supporter. Frank was honored to have received the Silver Beaver award for a lifetime of scouting. Forever a Wyoming boy, he loved traveling to Yellowstone and the Teton’s. In his later years, Frank enjoyed their weekly drives to Tony Grove and Bear Lake to admire the scenery and get a raspberry shake. Through all our wonderful memories what stands out and what we will miss most is his gentle patient soul and his heartwarming smile that he shared so freely. Frank is survived by his wife, Jo, children Holly (Barry) Bowen, Tasha (Ben) Wasden, Quinn (Megan) Brown and Zachary (Bobbi) Brown. His sister Suzanne Anderson and his 12 grandchildren, Britton, Audrey, Blair, Jonah, Sophia, Addison, Sienna, Ava, Lyla, Olivia, Stella, Logan and many nieces and nephews. Please come enjoy a smile with Frank at a Celebration of Life on Friday, August 6th from 6:30-8:00 p.m. at Allen-Hall Mortuary, 34 East Center in Logan. Interment will be in the Lovell, Wyoming Cemetery. Thoughts and memories may be shared to the family online at www.allenmortuaries.net. In lieu of flowers, please perform and act of kindness in Frank’s honor.

The family of Frank H. Brown created this Life Tributes page to make it easy to share your memories.

Send flowers to the Brown family.