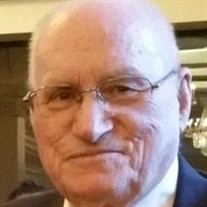 Frederick Norman Lloyd (89) died February 8, 2021 from causes incident to age. He was born December 21, 1931, in Riverton the second of 4 boys born to Frederick Edward and Blanche Beckstead Lloyd. Growing up he worked on his grandfather’s farm and played in the Jordan River bottoms with his brothers and cousins. He graduated from Jordan High School in 1950 and was proud to be a Beetdigger. He got a job at Kennecott Copper Mine and bought his first car, a baby blue Ford convertible. He told us the local girls always wanted to drag State Street with him in his cool car. In June, 1954 he was called to serve in the Atlantic States Mission. In the Mission Home he met Sister Dorthy Olsen, who was leaving for the Great Lakes Mission. Returning from his mission in Virginia and North Carolina, he was called up from the Army Reserves and shipped out to Korea for 22 months. When he returned home from Korea he looked up Dorthy Olsen and spent months driving back and forth from Riverton to Cache Valley until they were married November 19, 1958 in the Logan Temple. Norm graduated from USU and started teaching Science at Firth, Idaho Jr High. He loved teaching but felt he needed a higher income to support his growing family so he moved back to Cache Valley and returned to Thiokol where he’d been employed as an undergraduate student. He worked there as a Rocket Scientist until his retirement. Norm and Dorthy served 2 missions together, first in the Chile, Osorno Mission and then in the Santiago, Chile Temple. They also served for many years in the Logan Temple. Dad enjoyed being in the outdoors camping, hunting, fishing, and keeping track of Boy Scouts and his kids. His family was his greatest joy. Norm and Dorthy are the parents of 5 children: Susan Jellum, Nancy (Frank) Chavez, Jan (Rick) Cook, Jason (Allison) Lloyd and Matt Lloyd. He has 19 grandchildren and 8 great-grandchildren. He was preceded in death by his wife Dorthy, and grandson Steven Jellum. Funeral services will be held Saturday, February 20 at 1:00 pm at the Young Ward LDS Church, 2394 W 2200 S, Young Ward. A viewing will be held from 11:00-12:30 prior to the services. There will also be a viewing Friday, February 19 from 6:00-8:00 pm at Allen-Hall Mortuary. Burial will be in the Logan Cemetery with military honors. Services will be livestreamed and may be viewed online via the following link: https://us02web.zoom.us/j/86901733156?pwd=elBheEZHMVdnSFlWRFBjQXM1MGFYUT09 Password: Lloyd

Frederick Norman Lloyd (89) died February 8, 2021 from causes incident to age. He was born December 21, 1931, in Riverton the second of 4 boys born to Frederick Edward and Blanche Beckstead Lloyd. Growing up he worked on his grandfather&#8217;s... View Obituary & Service Information

Send flowers to the Lloyd family.