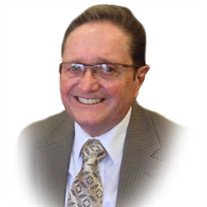 On Tuesday, January 26, 2021, Fredrick Thomas Yeates Smith passed away unexpectedly in his home at the age of 83. The community has lost a great husband, father, grandfather, and beloved Cache Valley citizen. Fred was born in Logan, Utah on April 13, 1937 to Thomas Leo and Melba Harriett Shaw Yeates. He was the youngest of eight children. Tragedy struck their family when his mother passed away from cancer on January 2, 1939. Just prior to her passing, Fred’s mother asked her cousin, Blanche Smith, to raise her little Fredrick. Little Freddie, as he was called, went home with Budge and Blanche Smith on Christmas Eve 1938. Fred was adopted by Budge and Blanche Smith when he was nine years old. While attending Logan High School, Fred played football, participated in track and field, and was a member of the LDS seminary council. While his classmates were finishing their coursework during his senior year of high school, Fred moved to Salt Lake City to live with his brother and his wife to attend Salt Lake Barber College. In the spring, he came back to graduate with his class in 1955. After graduation, he returned to Salt Lake City to finish his certification in barbering. Upon completion, Fred returned to Logan and enrolled at Utah State. He was an active member of the Sigma-Chi Fraternity. While studying at USU, Fred worked part-time as a barber at Modern Barbershop where he worked with his dad to pay for his education. In addition, Fred joined the National Guard and served in the artillery unit. His plan was to work as a barber long enough to buy a Corvette and pay his way through college at Utah State. While there, Fred loved to attend the many dances and social events held on campus. It was at one of those events that he met Linda McCann, a young lady that was attracted to the idea of a nice corvette. Unfortunately, after picking her up on their first date in an old car, Linda asked Fred, “Where’s the Corvette?” Fred replied, “I sold that car and toured Europe for three months with a friend.” Despite that, soon the two were married on November 12, 1962 in the Logan, Utah temple. Fred and Linda’s greatest blessings have always been their three children: David, Douglas, and Kelly Ann. As a family, they have enjoyed camping, water sports, and snow-skiing. For over 60 years, Fred was a well-known fixture….standing behind his barber chair on main street. In early 1984, Fred and Linda opened King Hair and later Hair Majesty in the old Royal Bakery building. Fred loved the Utah State Aggies and the Utah Jazz. Later in life, he became an avid watcher of the Hallmark channel. Fred was a life-long member of the Church of Jesus Christ of Latter-day Saints. He served as a Bishop, High Councilor, Sunday school president, a devoted home teacher, and a servant in many other callings in his life. He was an example to his family of the importance of taking the sacrament each week and staying close to the Lord. He also loved attending the temple regularly and had a testimony of his Savior and the restored gospel of Jesus Christ. He is preceded in death by his birth parents; Leo and Melba Yeates, his adoptive parents; Budge and Blanche Smith, his siblings; Keith, Merlin, Floyd, Troy, and Helen, and his in-laws; Robert and Fae McCann. He is survived by his loving wife Linda, and their children; David (Kristina) Smith, Douglas (Pamela) Smith, Kelly Ann (Brian) Shoell, 10 grandchildren, 4 great grandchildren, and siblings Barbara Johnson and Ruth Godfrey. A viewing will be held, Sunday, January 31, 2021 at the Allen-Hall Mortuary, 34 East Center Street, Logan, Utah from 6 to 8 p.m. Another viewing will be held from 11 to 11:45 prior to the funeral services beginning on Monday, February 1st at 12 p.m. under the direction of Bishop Jonathan Badger at the Bentwood Ward Chapel, 1650 East 2600 North, North Logan. The following zoom link is provided for those who will be unable to attend the service. Join Zoom Meeting https://zoom.us/j/99949543374?pwd=cTJicEExN2F5cmRpdWxxNS9ZaEowZz09 Meeting ID: 999 4954 3374 Passcode: Funeral One tap mobile +12532158782,,99949543374#,,,,*0928376# US (Tacoma) +13462487799,,99949543374#,,,,*0928376# US (Houston) Dial by your location +1 253 215 8782 US (Tacoma) +1 346 248 7799 US (Houston) +1 669 900 6833 US (San Jose) +1 301 715 8592 US (Washington DC) +1 312 626 6799 US (Chicago) +1 929 205 6099 US (New York) Meeting ID: 999 4954 3374 Passcode: 0928376

On Tuesday, January 26, 2021, Fredrick Thomas Yeates Smith passed away unexpectedly in his home at the age of 83. The community has lost a great husband, father, grandfather, and beloved Cache Valley citizen. Fred was born in Logan, Utah... View Obituary & Service Information