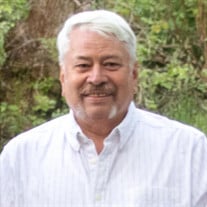 Garry Lee Roper, 68, of Hyde Park, Utah, unexpectedly left this earthly life December 31, 2020. He was born June 24, 1952 in Preston, Idaho to Willis and Donna Roper. His family moved into the home he grew up in, in Logan when he was 6 years old. He attended Logan High School where he graduated in 1970. He was a member of the Junior ROTC. After graduation he worked many various jobs. One of his favorites was at ATK Thiokol, where he was a recipient of many awards and recognitions, and truly enjoyed the work he did for the valued cause of space exploration. His most recent job was at Schreiber Foods, where he met and associated with many great people he considered friends. He met his partner in crime Cindy Hugie, of Hyrum, Utah in December of 1970. They were married March 16, 1973. Their marriage was later solemnized in the Logan Temple in July of 1979. They would spend the next 48 years of their lives together. They were the parents of 5 children. Jason, who left this earth too soon after his arrival, living only one hour after his birth, Jared and Danielle Roper of Richmond, Utah, Corey and Heidi Roper with Chesnie, Cambrie, Meggan, Paislee and Quincee of Mantua, Utah, Hilary and Landon Wood with Brooklyn, Kennady, and Layla of Perry, Utah, Kelsea and Tanner Gunnell with Peyton, Emmett, Harper, and Naomie of Smithfield, Utah. He is survived by his siblings, Allene (Glenn) Mattson, Orrin (Julie) Roper, Dennis (Debbie) Roper, and nieces and nephews, as well as many of Cindy’s brothers and sisters with their spouses and children. He was preceded in death by his parents, his mother and father-in-law, his son Jason, grandson Andrew and granddaughter Maliya. Some of his greatest joys were spoiling his grandchildren, finding great bargains at the D.I., and other local stores, and we can’t fail to mention Mountain Dew. He was a passionate gardener, growing produce for his whole family to enjoy throughout the year. He took great pride in keeping a beautiful yard. The family will host a viewing on Tuesday, January 5, 2021 from 6-8 p.m. at Allen-Hall mortuary. A brief viewing will be held from 10-10:30 a.m. on Wednesday, January 6, 2021 at the LDS church house at 42 West 200 South in Hyde Park, Utah. It will be followed by a funeral service at 11:00 a.m. He will be laid to rest in the Hyde Park cemetery, Hyde Park, Utah. The family would also like to thank the First Responders and EMS team who tried so valiantly to save the life of our beloved husband, father and grandfather. In lieu of flowers the family has suggested that donations be made to LDS mission funds. With the current Covid-19 restrictions, we ask that you wear masks, practice proper distancing, and follow the other required guidelines at all services. The ward has created a zoom link for this it is: https://us02web.zoom.us/j/81452412484?pwd=QXlyZktadTFLNzcrazJqS0RCb1k2Zz09 Meeting ID: 814 5241 2484 Passcode: 01062021 Dial your location +1 669 900 6833 US meeting ID: 814 5241 2484

Garry Lee Roper, 68, of Hyde Park, Utah, unexpectedly left this earthly life December 31, 2020. He was born June 24, 1952 in Preston, Idaho to Willis and Donna Roper. His family moved into the home he grew up in, in Logan when he was 6 years... View Obituary & Service Information

Send flowers to the Roper family.