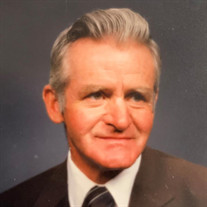 Garth Murray Archibald passed away January 6, 2021, in Ogden Utah, at the age of 89. Garth was born May 23, 1931 in Wellsville, Utah to Allen Hendry Archibald and Laura Murray Archibald. He was the sixth of seven children, five boys and two girls. Garth grew up on the family farm in Wellsville and had fond memories of his childhood. Being born at the time of the Great Depression, He learned to work hard. As a very young boy, Garth helped milk about 25 cows by hand. Farming was mostly done with a team of horses back then so he learned early to drive a team, as well as grow sugar beets, peas, hay and corn. Garth attended grade school and Jr. High in Wellsville and High School at South Cache High in Hyrum, Utah. He spent many hours playing basketball in the loft of the barn his Father built, and sledding behind a team of horses, or down the “big hill” with his friends. He met a girl from Mantua, while working at the Brigham Cannery to earn some extra money. Garth and Joann Isaacson were married on June 7, 1951 in the Logan LDS temple. Together they raised five children while running the farm in Wellsville. He also had a career as a Meat Inspector and worked at local meat packing plants throughout Cache Valley and Ogden. Garth’s favorite entertainment was attending farm sales and could never turn down a good bargain. Later in life, Garth and Joann were able to serve an LDS mission in Boston Massachusetts, and often said it was one of the highlights of his life. Garth and Joann moved to Young Ward, Utah, and later Willard Utah, but after Joann’s death in 1996, Garth moved back to Wellsville. He always considered Wellsville his home, and the people there, his friends. Garth is survived by his son, Rodney (Laurie) of Wellsville; daughters, Patricia Cronin of Murray Utah; Karla Eames of Millville, Utah; Denise Stuart of Smithfield, Utah; Daughter-in-law, Joni (Dave) Endicott of Mendon, Utah; 16 grandchildren and 13 great grandchildren; and his sister DeAnn (Blaine) Olsen of Hyrum, Utah. He was proceeded in death by his wife Joann Archibald; a son, Bruce Archibald; a son-in-law, Tom Eames; a son-in-law, Mike Stuart; his parents; four brothers, Virgil, Allen, Claine and Murray; and a sister, Ruth Ashton. Our family would like to thank the Terrace Grove staff for their exceptional care and friendship they showed our Dad. In lieu of flowers, the family requests that each of us find a way to show kindness to someone in need. A viewing for family and close friends will be held Monday, January 11th, 2021 at 10:30-11:30 am, with the funeral service to follow, at the LDS church, located at 200 S Center, Wellsville, Utah. Burial will be in the Wellsville Cemetery. Due to the current COVID Pandemic, we ask that you please wear masks and practice social distancing. Services are under the direction of Allen-Hall Mortuary, and will be livestreamed. To view services please click the following link: https://us02web.zoom.us/j/83735061084?pwd=RUVsSDdVWjF0SzRSR1RJbjdmT1ovQT09 Password:Garth

Garth Murray Archibald passed away January 6, 2021, in Ogden Utah, at the age of 89. Garth was born May 23, 1931 in Wellsville, Utah to Allen Hendry Archibald and Laura Murray Archibald. He was the sixth of seven children, five boys and two... View Obituary & Service Information

Send flowers to the Archilbald family.