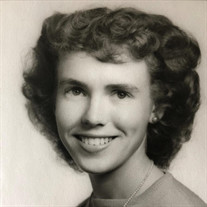 Gaylia “Gay” Pomeroy Norton passed away peacefully in the early morning of June 18, 2020 at her home in North Logan at the age 86. The first child of Leon Haskell and Rose Pomeroy, Gaylia was born on March 9, 1934 in South Gate, California. In her youth, Gay loved spending summers with relatives in Lindon, Utah riding horses and enjoying farm life. On one occasion, she hopped on a bare back horse, not expecting to go anywhere, when the horse unexpectedly bolted. She had traveled quite a distance, all the while yelling, “Whoa, horsie!” before it came to a welcomed stop. Gay was a life long prankster. During one summer in Utah, she lit off a firework in the lobby of a Provo movie theater. Years later, a woman recognized her and accusing her said, “I know you! You are the one who set off the firework that chased me up the stairs in the movie theatre”. She was proud of her fun loving nature. Later, one of her cars even had a license plate which read “Ms. Spunk”. Although Gay and Wayne grew up in the same ward in South Gate, California, they didn’t start dating until after high school. Since a temple marriage was so important, Gay, Wayne and their parents drove in non air conditioned cars across the hot Nevada desert in July to St. George, Utah (the closest temple at the time) to be married for time and all eternity on July 16, 1954. Gay lived in South Gate, Bellflower, and La Mirada, California; League City, Texas; Herndon, Virginia; North Logan, Utah and snow birded in Yuma, Arizona. She worked many places as a secretary: Firestone Tire, Alcoa Aluminum, Evergreen Elementary and Granada Middle schools, Pool Chlor, Rockwell International’s space shuttle program and finally, the Fairfax County Park System. Gay enjoyed her church callings, particularly in the Relief Society and Young Women’s programs. Over time, Gay collected many Marie Osmond dolls. When moving from Virginia to Utah, one complete U-Haul trailer was needed to transport them to her new home. Several dedicated home teachers were mustered to unload them all. Her grandchildren remember her as a prankster and teased her by calling her “Granny”. They enjoyed going to cat shows, dog obedience training, amusement parks and bargain shopping. She enrolled one granddaughter in weeklong summer programs for many years. Grandma was a good listener and was interested and supportive of the things going on in their lives. Gay’s family and friends love her. She will be deeply missed. Her beautiful smile and contagious laugh could light up any room. We all take comfort in knowing that she has returned to another happy home with our Heavenly Father and, that families are forever. She was preceded in death by her parents, Rose and Leon. She is survived by her husband, Wayne; sister, Claudia, two sons, Mark and Michael; daughter-in-law, Mary; five grandchildren, Camberley, Holly, Quincy, Tanner and Addilyn; four great grandchildren, Kylie, Henry, Paige and India; her Teacup Poodle, Polly and Calico kitty, Daisy. A graveside service will be held at the Providence Cemetery on Friday, June 26th at 12:00pm (with masks and social distancing observed). Services are under the direction of Allen-Hall Mortuary and condolences may be expressed to the family at www.allenmortuaries.net

The family of Gaylia "Gay" Pomeroy Norton created this Life Tributes page to make it easy to share your memories.

Gaylia “Gay” Pomeroy Norton passed away peacefully in the early...

Send flowers to the Norton family.