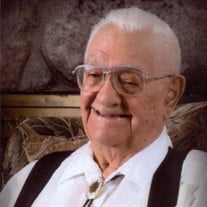 Our sweet dad, Gerald Junior Plowman peacefully passed away on March 3,2020 at Williamsburg Assisted Living in Logan Utah. He was born September 5, 1923 to James Gerald 'Jed' and Lillian (Tueller) Plowman. Raised in Smithfield UT, as a young boy he worked alongside his father, siblings and cousins at the family dairy farm, in the crops and fields. He graduated from North Cache High School in 1941 and attended USU Agriculture College. In 1944 he married his eternal sweetheart LaDonna Hardman in the Logan Temple. They enjoyed 63 years of marriage before she passed away in 2007. They have five children Kent (Terry) Plowman, Randy (Virginia) Plowman, Kevin (Shelly) Plowman, Rick (Debi) Plowman and Joni (Tom) Spidle. They have 12 grandchildren, 22 great grandchildren and 19 great-great grandchildren. Gerald and LaDonna lived in the Heber Valley before moving to Colorado in 1955. He started an artificial insemination business with Holstein Breeders Association and a franchise with American Breeders Service. Traveling all over Colorado and the western states to dairy farms teaching proper insemination techniques for dairy and beef cows. He also built a dairy cow operation known as Hygiene Dairy. He would forever be known as a ‘Cow Man’! They were some of the early branch members of the LDS Church in Longmont Colorado and dad held many positions in the church such as branch president and district president, but with four sons, some of his favorite positions were Scoutmaster and Scout Commissioner! Dad enjoyed serving with many community responsibilities as well. He was president of the Jr Chamber of Commerce for the city of Longmont, he served with the Lions Club, was a member of the Mountain Empire Dairymans Association, and the Colorado Beef Board for over 10 years. Dad and mom returned home to Cache Valley to retire in 1988 and shortly after dad lost his vision. Always an optimist, dad continued to enjoy many activities like square dancing, camping, traveling, supporting grandchildren and great grandchildren in sporting and musical events. At age 80 he enjoyed an Alaskan Fishing trip and a family Hawaiian Cruise at 83! He always had a smile on his face and a positive attitude about life, you very rarely heard him complain unless a referee made a horrible call. You usually saw him with his headphones on, keeping up with world and political news and enjoying a talking book. He was a great source of history. After LaDonna passed away our dad moved into Williamsburg, where he met Cleo McBride, they were married in 2009 and enjoyed several years of companionship before she passed away in 2018. As sad as we are that he is no longer with us, we know the reunion with his sweetheart LaDonna and his parents was a joyous one! Open those eyes up daddy, because now you can see all the things you have missed the last thirty years! He is survived by all of his children and spouses, his siblings Mavis Spencer, Carroll Carlson, and Ross Plowman. He was preceded in death by his parents, his wife LaDonna, his wife Cleo, granddaughter Megan Plowman Widmer and great great granddaughter Ainsley Rae Martin. Friends and family may visit from 10:00-11:30am on Saturday March 7, 2020 at Allen-Hall Mortuary, 34 East center Street Logan, UT. Funeral Services will follow at noon. Interment with be in the Smithfield City Cemetery immediately following the service. In lieu of flowers, please consider a donation to the Library for the Blind or better yet, enjoy a Diet Coke or an ice cream treat with your family in his honor! A special Thank You, from our family to Williamsburg, especially to Samantha and Liz for taking such great care of our dad! Until we meet again daddy, rest in Paradise!

The family of Gerald Junior Plowman created this Life Tributes page to make it easy to share your memories.

Our sweet dad, Gerald Junior Plowman peacefully passed away on...

Send flowers to the Plowman family.