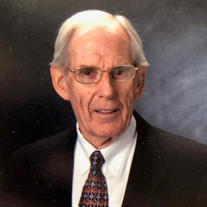 Gerald L. Purser passed on to the next phase of his life on Wednesday April 15, 2020. He was 90 years old and died from incident of age. He was born in Pocatello, Idaho on November 22, 1929 to parents James Lawrence Purser and Cleo Grace Holt. The family then moved to Salt Lake City. He attended Liberty School, Lincoln Jr. Middle School and South High School. His parents bought a few acres in rural West Jordan and Gerald began his love affair with horses. It was a love that stayed with him all his life. He and his brother Jim broke and trained horses and did some rodeos. In 1949 he received a call to serve as a missionary for 3 years in The Netherland and Flemish Belgium. His heart never forgot his years there. His favorite time was spent in Antwerp. Upon his return he attended college until he was called to serve his country. He was assigned to the Presidential Honor Guard in Washington D.C. and Arlington National Cemetery. He also served at Schofield Barracks on Oahu, Hawaii. Receiving an honorable discharge from the military he returned to finish college. As a college student he worked two summers at the National Parks (Zion, Bryce and the North Rim of the Grand Canyon). Here he met beautiful Margaret Thompson and two years later they were married in the Salt Lake Temple. They are the parents of four children, Lisa Beus (Ohio), Jon (Nevada), Jared (Lehi) and Catherine Chick (Florida). At this moment they have 22 grandchildren. They were married for 59 years. He worked with Lever Brothers Company which took them to Texas, Denver, and Wisconsin where he was sales manager. He then went to work for the Agricultural Division of Allis Chalmers as a creative director, editor, and wordsmith. He enjoyed working along side the Milwaukee Brewers of the National League and refereed high school and college basketball for thirty years. This was more enjoyment than actual work. On his spiritual side he worked for approximately twenty years in the Chicago and Logan Temples. He served on High Councils, as Elders Quorum President, Bishop, Stake Presidency, and regional welfare agent. For twenty years he was a member of the Milwaukee County Council for the Boy Scouts of America. After forty-two years, he and Margaret left their beloved Wisconsin and retired in Utah where it all began. A private family Graveside Service will be held Monday April 20th at the Logan City Cemetery.

Gerald L. Purser passed on to the next phase of his life on Wednesday April 15, 2020. He was 90 years old and died from incident of age. He was born in Pocatello, Idaho on November 22, 1929 to parents James Lawrence Purser and Cleo Grace Holt.... View Obituary & Service Information

The family of Gerald L. Purser created this Life Tributes page to make it easy to share your memories.

Gerald L. Purser passed on to the next phase of his life on Wednesday...

Send flowers to the Purser family.