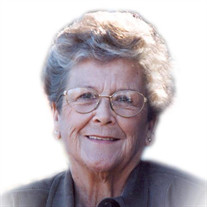 Geraldine Anderson Darley passed away peacefully surrounded by loved ones on February 23, 2020 in Hyrum, Utah. Gerry was born on February 19, 1928 in Hyrum, Utah to LaMar and Lucille (Allen) Anderson, and was raised in Hyrum. As a young child she spent her summers with her older sister Joyce (Anderson) Marcusen and younger brother Lynn Anderson at the C.L. Anderson ranch in Blacksmith Fork Canyon. Gerry graduated from South Cache High School in 1945. She met the love of her life Coy L. Darley in high school, and they were married on September 10, 1947 in the Salt Lake Temple. They were blessed with three children Gae, Brian, and Rosanne. Gerry was a wonderful wife and mother. After the children were in school she went to work for Utah Mortgage and Loan, then went to work for the South Cache Junior High School where she later retired. She was a faithful member of the Church of Jesus Christ of Latter-day Saints and served many callings. Gerry spent hours upon hours on her knees planting the most beautiful flowers in her rock garden. Gerry was well known for the beautiful red geraniums that she would plant in her front yard planter boxes. She was a member of the Daughters of the Utah Pioneers and a member of the Hyrum Literary Club. She also enjoyed monthly club get togethers with her friends that lasted over 70 years. In 1989, Gerry and Coy built a second home at the Star Valley Ranch resort in Thayne, Wyoming. Where they met and developed great friendships with people from across the United States. Gerry was an avid golfer in her later years, and became the president of the Women’s Golf Association and won the Women’s Club Championship at the Star Valley Ranch. The cabin became a great gathering place for her family. She spent many hours out on the golf course with her children and grandchildren. Her grandchildren thought she was the best cook in the world, because she would make Mickey Mouse pancakes for breakfast every morning. Gerry is preceded in death by her parents and husband Coy. She is survived by her children Gae (Jim) Leishman of Ogden, Utah, Brian (Tyla) Darley of Hyrum, Utah, Rosanne (Randy) Oldroyd of Smithfield, Utah, sister Joyce (Arlo deceased) Marcusen of ST. George, Utah, and brother Lynn (Kae) Anderson of Hyrum, Utah; eleven grandchildren, eleven great-grandchildren, and one great-great-grandchild. Viewing will be held Sunday, March 1, 2020, from 5:00 to 7:00 pm at the Allen-Hall Mortuary, 34 East Center Street Logan, Utah. Graveside services will be held Monday, March 2, 2020, at 10:00 am at the Allen-Hall Mortuary. Interment will be in the Hyrum City Cemetery. Condolences may be sent to the family at www.allenmortuaries.net. The family would like to express their sincere gratitude to the Blacksmith Fork Assisted Living Center for all they have done for Gerry. She loved each and every one of you.

Geraldine Anderson Darley passed away peacefully surrounded by loved ones on February 23, 2020 in Hyrum, Utah. Gerry was born on February 19, 1928 in Hyrum, Utah to LaMar and Lucille (Allen) Anderson, and was raised in Hyrum. As a young child... View Obituary & Service Information

The family of Geraldine Anderson Darley created this Life Tributes page to make it easy to share your memories.

Send flowers to the Darley family.