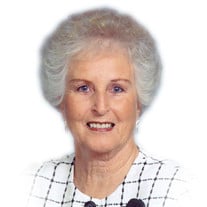 Geraldine Kidman Krambule Maurer (Geri) 88 passed away on January 24, 2020 of natural causes at her home surrounded by loved ones. Geri was born May 30, 1931 to Isabel Simpson and Chester W. Kidman. She was the second child of 6 children. She lived her entire life in Mendon, raised on a farm and worked along side her father and mother. She Graduated from South Cache High School in 1949. She married Kenneth Vincent Krambule on November 24, 1950. They had 2 sons, Steve and Mike. Kenneth was tragically killed in a work accident. While raising her 2 sons, she met and married Arthur Dean Maurer on June 8,1955. They had 3 children Shelley, Kathy and Rickey Dean. They were married for over 50 years. Gerri was preceded in death by both husbands, 3 brothers, 1 sister and a grandson. Mom worked at Mode O'day and Clearfield cheese plant for over 20 years. She played softball and enjoyed bowling on a league. She most enjoyed her garden of many flowers and won many awards. Mom played cards in a ladies club and was involved in Daughters of the Utah Pioneers for many years. She took some trips with her children. She was able to spent her so- birthday on a cruise to Alaska. Geri held many positions in the Church of Jesus Christ of Latter Day Saints, from primary to young womens. Geri touched the lives of all sho knew her with her kindness and generosity. She will leave a void in our lives, but we are joyful that she is reunited with her loved ones who have gone before. She has 5 children, Steven K. Krambule(Janeen), Michael K Krambule, Shelley M. Dewar, Kathy Bracken(Michael) and Ricky Dean Maurer (Margaret). Geri has 27 Grandchildren and 57 Great Great Grandchildren. She has a Grandson serving a mission in Alaska and a Grandson serving in the military. Gerri is survived by her sister, Georgia Hunt. A viewing will be held at Allen-Hall mortuary, 34 East Center Street, Logan Utah on Friday, January 31, from 6:00 to 8:00 PM. The Funeral will be held at the Mendon 4th Ward Church, 20 North 100 West on February 1, at 12:00 PM. A viewing will be held at the church from 10:30 to 11 :30 AM. Geri will be buried at the Mendon Cemetery. Funeral services are under the direction of Allen-Hall mortuary. Condolences may be expressed on line at www.allenmortuaries.net. Special thanks to the Eric Bowen family for the beautiful Casket.

Geraldine Kidman Krambule Maurer (Geri) 88 passed away on January 24, 2020 of natural causes at her home surrounded by loved ones. Geri was born May 30, 1931 to Isabel Simpson and Chester W. Kidman. She was the second child of 6 children. She... View Obituary & Service Information

The family of Geraldine Maurer created this Life Tributes page to make it easy to share your memories.

Send flowers to the Maurer family.