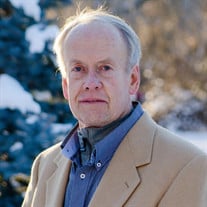 Gilbert C Larson died peacefully on January 8th at the age of 69 in Logan, Utah after a long courageous battle with Parkinson’s Disease. Gib was born on March 7th 1951 to Emil Ford and Clara Christensen Larson in Logan, Utah. He married Joyce Gunnell in 1970 in Logan, Utah. They were later sealed in the Logan LDS Temple. After living for a short time in Arizona while Gib attended Electronics tech school, they raised their family in Cache Valley. They made sure to instill a love of nature and adventure in their three kids. Gib and Joyce celebrated their 50th wedding anniversary in December. Gib had a successful career in the field of electronics and as a business owner. He loved all things with a motor, especially his trucks, cars, and motorcycles. He had a passion for tinkering, fixing, and building. He found great joy in returning to his father’s farm near Soda Springs, Idaho, and taking his children and grandchildren there to ride motorcycles and shoot guns. A devoted member of The Church of Jesus Christ of Latter-Day Saints, Gib held many callings in the church including 16 years serving the Young Men. He was a devoted father, husband, and grandfather. Gib is survived by his wife Joyce, his children Garry (Laraine) Larson, Curtis (Rousselene) Larson, and Jessyka (Josh) Gallivan, his sisters Noma Isaacs and Marco Huddleston, and his grandchildren Emma, Madeline, Austin, Owen, Makuru, and Adeline, and many loving nieces and nephews. He was preceded in death by his mother Clara, his father Emil, and his older brother Milford. A funeral will be held at Allen-Hall Mortuary, 34 E Center St, Logan, UT 84321 on Wednesday, January 13 at 11 a.m. Interment will be at the Providence Utah Cemetery. We respectfully request that masks be worn and social distancing be practiced. Services will be livestreamed and may be viewed via the following link: https://us02web.zoom.us/j/88175497353?pwd=RFJuTDFPVml6T25KRWw2dFJ0L0JGQT09 Larson

Gilbert C Larson died peacefully on January 8th at the age of 69 in Logan, Utah after a long courageous battle with Parkinson&#8217;s Disease. Gib was born on March 7th 1951 to Emil Ford and Clara Christensen Larson in Logan, Utah. He married... View Obituary & Service Information

Gilbert C Larson died peacefully on January 8th at the age of...

Send flowers to the Larson family.