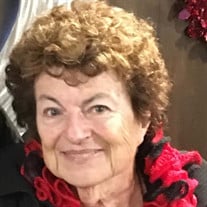 Gladys Pietruszewski Goodwin passed away quietly and on her own terms, Wednesday, October 27, 2021. She was born in New York on June 12, 1941 to Ethel DeJony and Joseph Pietruszewski. She married Richard Chester Goodwin “Goodie" in 1960. She was preceded in death by her loving husband Goodie and her son Allen S. Goodwin. She is survived by her children; Thomas A. Goodwin (Melinda) of Terrigal, Australia, Maria L. Bodrero (Sid) of North Logan, UT, Richard J. Goodwin of Jackson Hole, WY and her grandchildren; Cydne Salisbury (Erin), Shaelynn Conrad (Tyler), Charlotte Goodwin and Josiah Goodwin, and her great-grandchild Sophia Conrad. She is also survived by a sister Maria DeJony Franz, sister-in-law Francis Player and brother-in-law David Goodwin. She accompanied Goodie from Boston, Massachusetts to McGuire AFB New Jersey, Vandenberg AFB California, Holloman AFB New Mexico, Edwards AFB California, and Hill AFB Utah. They then settled down as a family in Logan, Utah. Gladys worked at Wurlitzer piano and organ factory, Greystone Gallery, then became a full time nanny to many wonderful families. She was also known as Newman Mom to many Utah State University students from the Saint Thomas Aquinas Newman Center near campus. She was very involved in fundraisers, events, and other affairs at Saint Thomas Aquinas Catholic Church and was such a proud member of the Catholic community of Logan. Gladys was known for her knitting and her unforgettable Christmas candy. She could knit just about anything including socks, blankets, dish cloths, baby clothes and doll clothes. She was always working on a gift for someone special. She also knew how to host a party! Food was always abundant and new faces were always treated like family. We would like to thank Maple Spring and the Logan Dialysis center for all their love, compassion and care for Gladys. A Funeral Mass will be held on Saturday, December 11, 2021 at 11:00 am at Saint Thomas Aquinas Catholic church, 725 South 250 East Hyde Park, Utah. Gladys will be laid to rest next to her late son Allen and husband Goodie at the Beverly National Cemetery in Beverly, New Jersey. Please wear red in honor of Gladys as it was her favorite color. In Lieu of flowers please consider making a donation to the Saint Thomas Aquinas Newman Center 795 N 800 E, Logan, UT 84321

Gladys Pietruszewski Goodwin passed away quietly and on her own terms, Wednesday, October 27, 2021. She was born in New York on June 12, 1941 to Ethel DeJony and Joseph Pietruszewski. She married Richard Chester Goodwin &#8220;Goodie" in 1960.... View Obituary & Service Information

The family of Gladys P. Goodwin created this Life Tributes page to make it easy to share your memories.

Gladys Pietruszewski Goodwin passed away quietly and on her own...

Send flowers to the Goodwin family.