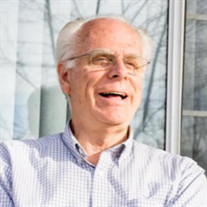 Glenn Dale Biddulph passed away July 4, 2020 from a heart attack. He was 74 years old, but he would only admit to 28. Glenn was born to Harold George Biddulph & Eula Richins Boatright Biddulph on December 29, 1945 in Glendale, CA. He is survived by one sister, Georgia Lemon, of Carlsbad, CA. He always said that California in the 1950’s was the best place to grow up. He loved his dogs and flying with his father. Glenn earned his own pilot’s license when he was in his teens. He graduated from William S. Hart High School in 1963, and he served a full-time mission for the Church of Jesus Christ of Latter-Day Saints in New Zealand from 1965 to 1967. When he returned from his mission, he attended Ricks College from 1967 to 1969 and then graduated from BYU in 1971 with a bachelor’s degree in business. He always spoke fondly of the friends he made at Ricks. Glenn worked in many businesses in California and Utah, including industry, real estate, retail, hospitality, and the U.S. Census. But his work is not the thing he was most proud of. His family is the thing that brought Glenn the most joy. He married Sandra Lynne Pope on January 26, 1970, in the Logan Temple. Despite having no pictures of their wedding day, they were happily married for fifty years. They raised a family of seven children: James (Jim) Biddulph, who is married to Tanja Anderson, & currently resides in Hartford, WI; CW4 (RET) Kenneth Biddulph, who is married to Heidi Flowers, & resides in Enterprise, AL; Brenda Biddulph, who is married to Tim Raccuia, & resides in Bountiful, UT; Karin Biddulph, who is married to Bob Floyd, & resides in Springfield, VA; Daniel Biddulph, who is married to Cherisse Peterson, & resides in Missoula, MT; Alison Biddulph, who is married to Paul Johnson, & resides in Logan, UT; and Susan Biddulph, who is married to Stuart Young, & resides in Logan, UT. Glenn and Sandra have 17 grandchildren ranging in age from 26 years to 8 months. Glenn would have become a great-grandfather this coming November. Glenn and Sandra moved to North Logan, UT in 1985, where they have lived for thirty-five years. After he retired, Glenn loved to go fishing with his children and grandchildren. One of his favorite things was to sit on his patio with his sons or grandsons and shoot at the birds (with his Red Ryder BB gun) that were trying to eat his cherries. He was an accomplished woodworker who could make anything from bowls to desks to scooters for his grandkids. He was a true handyman who could fix most things and even taught his daughters over the phone how to fix things. He kept a beautiful lawn and garden, and he raised chickens and bees. His favorite vacations were those where he traveled to see his children. Glenn and Sandra served two missions for the Church of Jesus Christ of Latter-Day Saints as senior missionaries. They pioneered a program wherein senior missionaries served in their own stakes, and then they served in the Utah Logan mission as the senior missionaries over housing. Glenn served in many church callings over the years, but he particularly enjoyed serving in student ward bishoprics and as the financial clerk. Glenn will be missed so very much by those who were blessed enough to know him. He was an exemplary father and husband and a beloved grandfather & father-in-law. He was a faithful member of the church. He was a kind neighbor. He was an honest businessman. And, in his own words, he was “a handsome critter.” A viewing will be held Thursday, July 9th, at Allen Mortuary of North Logan, 420 East 1800 North, North Logan, between 6 and 8 pm with masks required and social distancing practices in place. A family graveside service will take place Friday, July 10th beginning at 10am at the North Logan Memorial Park Cemetery. Condolences may be expressed online at www.allenmortuaries.net

Glenn Dale Biddulph passed away July 4, 2020 from a heart attack. He was 74 years old, but he would only admit to 28. Glenn was born to Harold George Biddulph & Eula Richins Boatright Biddulph on December 29, 1945 in Glendale, CA. He is survived... View Obituary & Service Information

The family of Glenn Dale Biddulph created this Life Tributes page to make it easy to share your memories.

Send flowers to the Biddulph family.