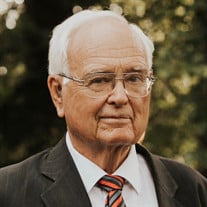 Glenn Ridges Keller, our beloved patriarch, father, and friend, peacefully completed his mortal life on March 20, 2022, in Logan, Utah, surrounded by his family. He was 85 years old. Glenn was born on January 12, 1937, in Ogden, Utah, the eldest of three siblings of Lloyd William and Marjorie Ridges Keller. He spent much of his childhood in Utah’s backcountry, hiking, camping, and hunting with friends. Even in his early youth, he contributed greatly to his family’s livestock operation. He graduated from Ogden High School in 1955, where he was a member of the rifle marksmanship team. He subsequently graduated from Weber College, earning an associate’s degree. He served an LDS mission in the Hawaiian Islands from 1957-59, before Hawaii became a state. A substantial and especially tender part of his service was among the leper colonies on the island of Molokai. Following his mission, Glenn attended Brigham Young University, graduating at the top of his finance and banking class in 1962. His impressive ballroom dancing skills at BYU attracted the attention and ultimately captured the heart of Linda Ann Wursten, to whom he would unwaveringly dedicate the rest of his life. They were married on October 19, 1962, in the Idaho Falls LDS Temple. Having settled in Cache Valley in 1964, they raised seven children in mutual and lasting faithfulness. They chose to reside in Providence, since it served as a midway point between the livestock ranches in northern Utah that Glenn managed. He served in the Utah National Guard, specializing in ballistics at the Ogden Army Depot. Together with his wife Glenn completed a second LDS mission, in the Ohio Cleveland-Akron-Kirtland Mission, from 2006-07. His efforts largely focused on the youth of the Church and their involvement in the Church Educational System. He was a fearless defender and promoter of the Restored Gospel of Jesus Christ. In addition to his full-time missionary labors, he served in a multitude of Church callings, including gospel doctrine instructor, temple baptistery coordinator, Bishop, and Patriarch, influencing and inspiring the lives of thousands. He revered and consumed the scriptures to the point where he could recite virtually any passage from memory. Glenn was a sheep and cattle rancher by trade, spending all of his professional life at the family’s three ranches at Promontory, Avon, and Franklin Basin. He was a true conservationist and steward of both the land and his animals, was keenly aware of their needs, and possessed a stunning and unsurpassed knowledge of their capabilities. He expertly nurtured the delicate balance between agricultural interests and environmental considerations. Glenn’s physical toughness was matched only by his spiritual softness. He reverenced classical music and its composers, and felt that such music was an avenue to the divine. He was a student of history, both secular and spiritual, which contributed to his towering intellect and knowledge of things as they really are, and things as they really will be. He reverenced the Prophet Joseph Smith and, above all, spoke frequently, deferentially, and intimately of the Master, Jesus Christ. Glenn was certain in the knowledge of who he was, and to Whom he ultimately belonged. He had seven children, 29 grandchildren, and 10 great-grandchildren. He is survived by his wife Linda of Providence, sons Brent (Linda) of Providence, Brian (Stacie) of Eagle River, Alaska, David (Stacy) of Paradise, Paul (Angie) of Mendon, Steven (Megan) of Idaho Falls, James (Angela) of Browntown, Virginia, daughter Julie (Chris) Kelly of Jasper, Indiana, brother Steven (Karen) of Ogden, and sister Kay (Gary) Samples of South Ogden. He was preceded in death by his parents and one great-grandson. Funeral arrangements will be under the direction of Allen-Hall funeral services. A viewing will be held from 6-8pm on Sunday, March 27, 2022, at Allen-Hall Mortuary, 34 East Center Street in Logan. Funeral services will be held at 1pm on Monday, March 28, 2022, at the LDS Church located at 155 North 100 East in Providence. An additional viewing will be held prior to the service from 10:30-12pm. Internment will be in the Providence Cemetery. Condolences may be expressed online at www.allenmortuaries.net Services may be viewed via the following link: http://mywebcast.churchofjesuschrist.org/riverheightsutahstake CODE: 34214

Glenn Ridges Keller, our beloved patriarch, father, and friend, peacefully completed his mortal life on March 20, 2022, in Logan, Utah, surrounded by his family. He was 85 years old. Glenn was born on January 12, 1937, in Ogden, Utah, the... View Obituary & Service Information

Send flowers to the Keller family.