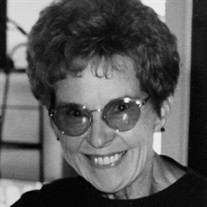 Gloria Hansen Howells, aged 81, passed away September 29, 2020 after a long battle with Parkinson’s disease and Gastroparesis. She was born April 10, 1939 in Logan, Utah to Elwood and Thelma (Lewis) Hansen. She married her high school sweetheart Richard Kent Howells (Colonel USAF) March 18, 1961 who preceded her death in 2006. Gloria was raised in Providence Utah and graduated from South Cache High School in 1957. She majored in English and earned a Bachelor of Science degree from Utah State University in 1961. Richard was commissioned in the Air Force in 1964 and they left Cache Valley for many years. Gloria and Richards' nomadic lifestyle required by the military gave her the opportunity to visit all fifty states and several countries. After Richard’s retirement, Gloria returned to Providence in 1995 where they built a house overlooking the valley. Gloria had a passion for life, loved to laugh and made entertaining others a priority in her life. Her famous rendition of White Christmas brought the house down on several occasions. She loved quilting, gardening and canning. Her talent in needlework allowed Gloria to make many infant blankets and hats for humanitarian efforts. She served an LDS calling from 2007 to 2009 in the California Los Angeles Mission working in the Family History Center. Returning she began writing individual and family histories, having several published for her ancestor’s many progeny. Gloria is survived by her sister Kate Anderson, and her brother Lance Hansen; her five children Brady, HollySue, Brooke, Rebecca and Justin; her twelve grandchildren, Hyun, Hannah, Drew, Taryn, Teagan, Derek, Ffiona, Brayden, Haedyn, Katelyn, Dylan and Rowan; and one great grandson Wesley. Gloria’s viewing for family and close friends will be at Allen-Hall Funeral Home, 34 East Center St Logan, Friday, October 9 from 6 to 8 P.M. Her funeral service will be at Fruitland Acres Ward, 464 North 300 East in Providence, Saturday, October 10 at 11 A.M. Graveside service following at Providence City Cemetery. Masks required.

Gloria Hansen Howells, aged 81, passed away September 29, 2020 after a long battle with Parkinson&#8217;s disease and Gastroparesis. She was born April 10, 1939 in Logan, Utah to Elwood and Thelma (Lewis) Hansen. She married her high school... View Obituary & Service Information

The family of Gloria Hansen Howells created this Life Tributes page to make it easy to share your memories.

Send flowers to the Howells family.