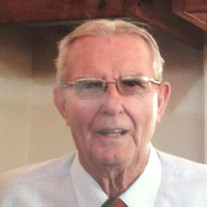 LOGAN - Grant Fredrickson Christensen, 93, died Sunday, January 24 2021, peacefully at home in the presence of family members. Grant was born in Logan, Utah on September 5, 1927, the fourth and youngest child of Christian Konrad and Anna Albertina Fredrickson Christensen. Grant’s older siblings who have passed are Dale (Mary), Ruby (Nolan Victor), and Ross (Jennie). Grant attended Logan schools through his junior year of high school, and attended Utah State University after returning from military service. At the age of 17, Granten listed in the Merchant Marines for the duration of World War II, and served in the South Pacific. On September 2, 1945, Grant was present at the Tokyo Bay ceremony where the Japanese government officially surrendered to the allied forces aboard the USS Missouri. After an honorable discharge from the Merchant Marines, Grant enlisted in the US Army and was stationed in post-war Japan for the next 18 months, where he completed his high school education. Upon his return, Grant worked for the U.S. Post Office as a mail carrier and later as a clerk until his retirement in 1985. During much of this time, he worked a second job at the Logan Pepsi Cola bottling plant several nights a week loading and unloading trucks. After retiring from the Post Office, Grant worked part time at other jobs, including Horlacher’s Meats as a delivery truck driver, inspector at the Cache Valley Cheese plant, and grocery bagger at Macy’s. He particularly enjoyed his job at Macy’s where he was able to visit with customers and friends during his shifts. Grant was a lifelong member of the Church of Jesus Christ of Latter-day Saints, and was a member of the Logan 3rd Ward for 90 of his 93 years. During this time, he served in many Ward and Stake callings, including bishop. Grant and Renee served as supervisors in the Logan Temple Baptistry for over six years. Grant enjoyed sports of all kinds, and coached his sons’ various sports and Little League baseball teams. He was a pitcher on both church and commercial league fastpitch softball teams and played in numerous local, regional and national tournaments during those years. He loved to hunt and fish, and enjoyed these activities with friends and family. He enjoyed bowling in the city league as part of the Post Office team, and later took up snow skiing which he enjoyed for many years. Family vacations to Yellowstone Park and surrounding areas were family favorites for many years while the children still lived at home. Grant quietly helped others in need throughout his life. For many years, he mowed the lawns and shoveled snow for seniors and widows in the neighborhood. He always had a smile and kind words for those he met – friends and strangers alike. He taught his children by example the character traits of honesty, hard work, integrity and service. We are so appreciative of his life-long dedication and devotion to our family. Grant married Renee Stanton in the Logan LDS temple on June 25, 1948. They were the parents of five children. Grant is survived by five children: Dennis (Alison) of Riverside, CA; Sharon of Providence; Larry (Cheryl) of E. Hartford, CT; Todd (Peggy – deceased) of Logan; Cory (Lynda) of Salt Lake; nine grandchildren, and 13 great grandchildren. Grant was preceded in death by his parents; wife (Renee); sister, Ruby; brothers, Dale and Ross; and daughter-in-law, Peggy (Bates). Grant will be greatly missed by all who knew him. Funeral services will be held at 1:00pm on Friday, January 29th at Allen-Hall Mortuary, 34 E. Center St., Logan. A viewing will be held from 11:30am to 12:30pm. Interment will be in the Logan Cemetery. Condolences and thoughts may be expressed online at www.allenmortuaries.net. Special gratitude goes to his daughter Sharon for extending herself in amazing ways to provide for his care, companionship and tender mercies over the years. The family wishes to express their appreciation to the wonderful caregivers from Intermountain Home Healthcare and Hospice, especially nurse Ashley and aids Pam and Cameron. Services will be livestreamed and may be viewed at: https://us02web.zoom.us/j/89256669364?pwd=R2lVQ0JvMHIycS9ka0VybFlyNndUQT09 Password: Grant

Send flowers to the Christensen family.