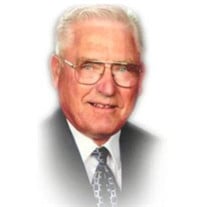 Grant LaMar Nelson died on Friday, April 10, 2020—the result of old age—with three of his 6 children holding his hands and stroking his forehead, encouraging him to take the next step. LaMar was born April 28, 1935, in Howell, Utah, Box Elder County, to Norman and Elizabeth Datwyler Nelson. LaMar came into a family devastated by the Great Depression and, at age 8, was given to another family to be fed and cared for in exchange for his labor for a short time. In a recent discussion about the experience, he said he was thankful for this kind family. He liked the gentle teasing of the older sons and was well taken care of. Upon reflection in later life, he said he was the loneliest boy among the poorest of the poor. During Dad's tenth year his family moved to Young Ward then later settled in College Ward, Utah. LaMar graduated from South Cache High where he played shortstop on the school’s baseball team. In his senior year one teacher told him he would never be anything but a ditch digger; LaMar was determined to prove him wrong. LaMar met Kathleen Isaacson while dragging Logan’s main street. She and her sister drove over the mountain from Mantua to meet with friends at the Spudnut on South Main in Logan. LaMar and Kathleen struck up a friendship which led to their marriage on August 16, 1957 in the Salt Lake LDS Temple. Determined never to be poor again, through sheer will and an unflagging work ethic, he set about to build a means of supporting his family. In 1963 LaMar felt spiritually compelled to accept a calling from the Church of Jesus Christ of Latter-day Saints. He took his young family to Viña del Mar, Chile where he constructed one of the first LDS chapels in that country, making each brick by hand in a kiln he fashioned from spare parts. Returning from Chile, LaMar and Kathleen lived in Logan then later settled their family in College Ward, Utah. Again, through sheer will and an unflagging work ethic, he worked to re-establish his cement contracting business. To supplement his income as a contractor, and to create a life around his interests, he established a small farm in College Ward. LaMar purchased one of the first snowmobiles in Cache Valley, raised registered Quarter horses, camped, hunted and cut wood around the abandoned La Plata silver mines—involving his family in everything he did. He turned over the ignition of his work truck at 5:30 a.m. and shut off the tractor at 10:00 p.m. Once, while driving with his son along the Wasatch Front, he pointed to Fruit Heights and said, “I built nearly all of those homes.” A devoted religious man, his scriptures were always open on his desk. He served as LDS bishop in College Ward, along with many other leadership callings. He fondly adopted the older widows of the community making sure their needs were met and gently teasing them as they fed him pie; his favorite being apple. Generations of College Ward young men have memories of canoe trips to the Wind Rivers, winter camping in snow caves near Franklin Basin, and games of capture-the-flag in the back country. A favorite for many young men was building collapsible kayaks, bentwood bows and hand feathered arrows. Youth and leaders benefited from trips to youth conferences, Manti pageant excursions (on a nice bus), as well as church missions, served by young and old, which were funded by his generosity. LaMar was a member of the U.S. army, a trickster, jack of all trades, a devoted member of his church with the good looks of Paul Newman and the swagger of John Wayne. He took no guff and kept score—if you still owe him money, he remembered you until the end. With a body broken from a lifetime of physical labor, he suffered unrelenting pain yet continued to raise steers and farm his land until he could no longer lift his foot high enough to catch the rung of his tractor. He is survived by five of his six children and a daughter-in-law: Elizabeth Ann Saunders (Vince), Trish Nelson (Grant Jr), Jane Wade (Stephen), Sandra Ricks (Mike), Fred Nelson and Janice Dopp (Mike); 22 grandchildren and 31 great-grandchildren. He was preceded in death by his wife of 52 years, Kathleen; son Grant Junior (Shorty); a granddaughter, Ellen Kathleen Ricks and son-in-law, Michael Barrett. LaMar was buried in the Logan City Cemetery. A memorial service will be announced when the current circumstances have passed. Instead of flowers, please email your memories of LaMar to [email protected] The family is very thankful to the many caregivers at Maple Springs Assisted Living and Tender Care Hospice and to the good folks of College Ward who continued to visit him up until the end. Funeral Services are under the direction of Allen-Hall Mortuary and condolences may be shared on-line at www.allenmortuaries.com.

Grant LaMar Nelson died on Friday, April 10, 2020&#8212;the result of old age&#8212;with three of his 6 children holding his hands and stroking his forehead, encouraging him to take the next step. LaMar was born April 28, 1935, in... View Obituary & Service Information

The family of Grant LaMar Nelson created this Life Tributes page to make it easy to share your memories.