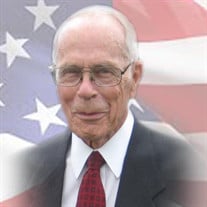 ***GUY STEVENS FUNERAL HAS BEEN RESCHEDULED. DETAILS ARE AT THE END OF HIS OBITUARY*** Jesse Guy Stevens Jr., (96) of Logan, Utah passed away peacefully at his home on January 15, 2022. He was born September 17, 1925 in Pocatello, Idaho to Jesse Guy Stevens and Corinne Catlett Stevens. He was the second of two children. He attended Irvine Elementary and graduated from Blackfoot High School in Idaho. Guy attended and graduated from Idaho State University with a degree in Business Administration. Guy served in the Army completing his basic training at Camp Shelby, Mississippi. He was deployed to the eastern theatre of WWII in the 75th Infantry Division. This division started combat on Christmas day of 1944 in the "Battle of the Bulge." Guy received three battle stars for taking part in three major combats: Battle of the Ardennes, Rhineland Battle, and the Central Europe Battle. He was one of the last remaining WWII survivors. A true hero! Guy married Joy Luthi on June 17, 1960 in the Idaho Falls, Idaho Temple. Together they celebrated 49 years of marriage and were blessed with three children. Guy worked in the furniture business for Boyle Furniture. While located in Blackfoot, Guy and Joy welcomed their first child, Ann. Later the family moved to Salt Lake City, Utah where they welcomed their second child, Sally. The family then moved to Logan where he worked again in the furniture business for Lundstrom Furniture. Several years later they welcomed their third child, Scott. Guy then changed professions and spent the rest of his working career in the life insurance business as an agent. Guy joined The Church of Jesus Christ of Latter Day Saints while attending Idaho State University. He served in many callings. In particular, he enjoyed serving as the ward financial clerk for 20 years. Guy enjoyed being in the outdoors while hunting, fishing and of course golfing. He still swung a golf club at the age of 96 with a small group of friends. Guy also loved and looked forward to watching sporting events. He was passionate about the Utah Jazz and the Utah State Aggies. His greatest pleasure was watching his grandson's play sports such as basketball, soccer, and baseball. Guy was the most kind and loving father and grandfather anyone could ever hope for. What a blessing he was to all who knew him. He will be greatly missed! Guy was preceded in death by his parents, Guy and Corinne Stevens, his wife Joy Stevens, his daughter Sally Meikle, and brother, John Catlett Stevens. Guy is survived by his daughter Ann Leishman (Dana), son Scott Stevens (Cami), and his grandsons Colby, Caden, Tyler, and Riley Stevens. Funeral services will be held on Saturday, January 29th at 11:00 a.m. at the Lundstrom Park Ward Chapel, 1260 N 1600 E in Logan. A private family viewing will be held prior to the service. Interment will be in the Logan City Cemetery where military honors will be performed. Services will be livestreamed and can be accessed online at: https://us02web.zoom.us/j/86130686464?pwd=NHcwOHN5YkRWRGZ3TWxtWURyb0JPdz09 (password: Guy) Services will also be video recorded and can be viewed via the below link: https://www.allenmortuaries.net/obituaries/Jesse-Stevens-2/

***GUY STEVENS FUNERAL HAS BEEN RESCHEDULED. DETAILS ARE AT THE END OF HIS OBITUARY*** Jesse Guy Stevens Jr., (96) of Logan, Utah passed away peacefully at his home on January 15, 2022. He was born September 17, 1925 in Pocatello, Idaho to... View Obituary & Service Information

***GUY STEVENS FUNERAL HAS BEEN RESCHEDULED. DETAILS ARE AT THE...

Send flowers to the Stevens family.