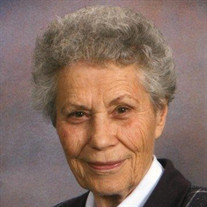 Hazel Dona Campbell Stettler Manning, 93, died peacefully Thursday, April 9, 2020 in Orem, Utah. Born December 22, 1926 in Riverdale, Utah, the ninth of thirteen children of Hazelton Joiner and Maria Louisa Bingham Campbell. She married Golden Ray Stettler on June 26, 1946 in the Logan Temple. He died August 17, 2001. She later married David K. Manning on June 30, 2007. He died November 7, 2019. Hazel and Golden were blessed with fourteen children, eight of whom they raised to adulthood: Anita (Spencer) Cranney, South Jordan; Carl Stettler, Hyrum; Mary (David) Bell, Farmington; Ruth (Darrell) Spendlove, Smithfield; Betsy (Jerry) Toombs, Benson; Ginny (Kip) Meacham, Orem; Alan (Wendy) Stettler, Murray; Sara (Vernal) Hurst, Layton. She has 45 grandchildren and 76 great grandchildren. Hazel was preceded in death by her two husbands and children Christian, Alexander, Mary, Timothy, Thomas, Richard and Anna Maria. Hazel’s earliest memories are of living in Juniper, Idaho. She always considered Juniper her home. It’s where the family ranch was, and where she often spent her summers while growing up. Her family moved to Burley, Idaho and later to Logan, Utah, where she graduated from Logan High School. She and Golden made their home there, raising a large family with a large garden and larger-than-life neighbors. Hazel is a member of the Church of Jesus Christ of Latter-day Saints. Her life was dedicated to serving the Lord wherever she was needed, from Blazers to Relief Society and everything in between. Her roadshows in the Logan 19th Ward were legendary. She loved Family History and devoted time helping library patrons and doing extraction, research and temple work. Hazel served two missions with Golden, the first with their six children in Britain from 1962 to 1964, then in the California San Jose Mission from 1991 to 1993. Hazel had interest and proficiency in many things including gardening, sewing, working, hand quilting, refinishing furniture, painting (art and houses), civic affairs, politics, working, singing, hiking, camping, horseback riding, working, and anything supporting her immediate and extended family. She picked up skills from Golden’s construction expertise and was known to build walls, hang drywall, lay tile, run wiring, install insulation, and even float concrete flatwork. She knew how to work (was that mentioned?), never quitting until long after everyone else had left the job. If she found you standing, in short order you’d have a shovel or a campaign poster in your hands. She was undaunted in facing any challenge and had a thirst for learning that never quit. Above all, Hazel was an amazing wife, mother, grandma, sister, aunt and friend. She and Golden loved people, entertained family and friends from across the earth, and opened their hearts and home to everyone who crossed their path. Hazel had the rare gift of being the mother-in-law who was deeply and sincerely loved by all of her children’s spouses. She was the favorite aunt to hundreds and had a zest for life and a liveliness she imbued into all her family relationships. We’re heartbroken we can’t gather with all of you to celebrate her life. A private graveside service will be held at Logan Cemetery on Tuesday, April 14, 2020. Funeral arrangements directed by Allen Mortuary of North Logan. www.allenmortuaries.com

The family of Hazel Stettler created this Life Tributes page to make it easy to share your memories.

Send flowers to the Stettler family.