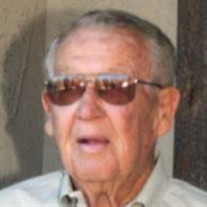 Heber Clair Parker June 4, 1934 – January 31, 2022 Heber C. Parker, life-long resident of Wellsville, passed away on Monday, January 31, 2022. Growing up in Wellsville, Heber worked with his family on their farms in Wellsville and in Young Ward. He was the son of Heber Bradshaw Parker and Ida (Leonhardt) Parker. He had two sisters, Louene and Ida Mae. He was preceded in death by all four. Heber attended South Cache High School, graduating in 1952. After his public school education, he joined the U.S. Air Force where he attended Utah State University and graduated from University of Wisconsin-White Water College. A veteran of the U.S. Air Force, Heber chose Civil Service upon his discharge from active service. He maintained six years of active Reserve duty flying with the 317 Heavy Bomb Wing out of McChord AFB, Washington. Heber married Jean (nee’ Bindrup) Parker on June 5th, 1959 and together they raised their family in Wellsville. To quote a letter from Heber “Everyone should know I had the best wife in the World.” Sons Brian and Jason took up the passions of their Dad while growing up. Family big game and waterfowl hunting trips and fishing trips filled their vacations and summers. They also owned and raced horses for many years. Brian’s two daughter’s, Kacee Jo (Parker) John and Kyann Parker were his pride and joy and he loved teaching them to hunt as well. Heber was happy getting to get to spend time with his great-grandchildren, Sage Jo and Michael too. His family was a great source of pride and happiness for him. He was known as a great friend to many. He and his friends from his youth remained friends all their lives and enjoyed getting together to visit and reminisce about the old days. Once Heber was discharged from the Air Force in 1958, he began his career as a civil servant at Hill Air Force Base, eventually attaining the post as the most senior civil staff member of the Aircraft Division. There are many stories of his 38 year career at HAFB, all interesting, most funny and some not to be repeated! Once retired, Heber spent many days hunting and fishing. Big game trips to Montana/all over Utah, fishing trips at Viva Naughton in Wyoming and duck hunts at the 41 Club in Promontory became his new job. It would be extra special for him to take Brian and the granddaughters along. He also loved all the dogs that came thru his life. When asked what he wanted to say about his life, Heber would say “He lived, he died, and it’s done”. Heber is survived by his wife, Jean, sons Brian (Kelly) Parker and Jason Parker, granddaughters Kacee Jo (David) John and Kyann Parker and two great-grandchildren. He will be greatly missed by his family and friends. Services (no viewing will be held) are Saturday, February 5th, 2022, 11 a.m. at Allen-Hall Mortuary, 34 East Center Street in Logan, Utah. A private graveside service for family only will be held after at the Wellsville Cemetery with military honors. www.allenmortuaries.com

The family of Heber Clair Parker created this Life Tributes page to make it easy to share your memories.

Send flowers to the Parker family.