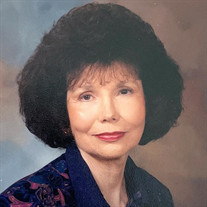 Helen Bradshaw Morris passed away peacefully at home on January 21, 2022 after a long struggle with heart failure. Members of her family were at her side. She was 93. Helen was born on September 18, 1928 in Montwell, UT, on a kitchen table in a log cabin by the light of a kerosene lamp. She was the great-granddaughter of Mormon pioneers who came from England and Denmark. She was the daughter of Earl Clifford Bradshaw, who was a miner and farmer, and Freda Belle Corbett Bradshaw, who was a teacher. She was the eldest of three children. Her younger siblings are Valene Bradshaw Fluckiger and Jack C. Bradshaw. Helen spent her early life in the Kamas valley. When she was 14 years old her family relocated to the Emmett, Idaho area where she spent the rest of her teen years. She was an excellent student and valedictorian of her high school graduating class. At great sacrifice her parents sent her to college. She attended the College of Idaho at Caldwell for a year and then transferred to Utah State Agricultural College in Logan. There she met her future husband, Blaine Morris, Jr., and graduated with a bachelor’s degree in social work. She and Blaine married in the Salt Lake Temple on November 29, 1949. Helen and Blaine were approached by the the director of the Logan LDS Institute of Religion, Dr. W. W. Richards, about becoming teachers in the seminary at Logan High School. Helen taught there for a year while Blaine finished his bachelor’s degree. She then became a full-time homemaker and Blaine moved into the teaching position. Helen and Blaine became the parents of four children: Stephen Blaine, Bradley Earl, David Bradshaw, and Julie Ann. David was born prematurely and lived only three days. His death was Helen’s greatest sorrow. When her children were older Helen entered graduate school at Utah State University. In 1968 she received a master’s degree in counseling psychology and became a guidance counselor at Logan Junior High, a position she held for 23 years. She was a positive influence in the lives of hundreds of students, her professional colleagues, and her trainees. Helen was a devoted member of the Church of Jesus Christ of Latter-day Saints and was actively involved throughout her life. She served as a teacher, a member of presidencies, and most enduringly as a devoted visiting teacher. She loved the women she served. Perhaps her favorite calling was to serve as co-leader, with Blaine, of the “young marrieds” group in the old Logan Seventh Ward. Her last calling, apart from visiting teacher, was to play the piano in Primary, which she did until her eyesight failed. Helen came from a missionary-minded family and she always longed to serve a mission. After retirement she and Blaine served a full-time proselyting mission in Oakland, California, where she used her skills to help numerous people, including many disadvantaged people, learn about the Church. There she and Blaine developed permanent friendships with their fellow senior missionaries. Helen and Blaine are the grandparents of David, Angela, and Michael Morris, Alexandra, Jonathan, and Matthew Morris, and Ruth, Rachel, Adam, Rebecca, Emily, Catherine, Jacob, and Sarah Whitney. They have 40 great-grandchildren and counting. An infant great-granddaughter, Julianne Buxton, preceded Helen in death. Helen was a devoted sister, mother, grandmother, and great-grandmother. Even in her declining years when her health and her eyesight were poor, she always reached out to support the many members of her family. Each one felt he or she was special to her. One of her greatest joys was to host her annual family Christmas party. She made sure each member of her family had an individualized gift. She also loved hosting her annual Easter egg hunt. After all the eggs were gathered she loved watching the children scramble for the salt water taffy she would throw from her deck onto the lawn, even when she could no longer see very well. She could never throw very well. Helen was a talented and accomplished person. In spite of her humble beginnings she became a published author, an accomplished pianist, a persistent genealogist, a prolific family historian, a powerful public speaker, and a gifted teacher. She was shy in many situations and most people didn’t know about her achievements. Helen loved beautiful music, great literature, and fashionable clothing. She especially loved to travel. She visited many places, including England, Denmark, the Holy Land, Canada, Mexico, and many parts of the United States. She always wished she could travel more, especially in her declining years when this was no longer possible. Using the proceeds from sale of a steer, she funded a family road trip across the United States when her children were young. She and her family were fond of sharing their memories of those adventures and misadventures. Helen was a good listener. She had a compassionate heart and a willing ear. Over the years she helped many people feel understood and loved. Her empathy was based partly on her own suffering. She had some significant health problems throughout her life. She persevered in spite of them and set a memorable example of courage and endurance, especially at the end. Helen was preceded in death by her parents, her son David, her husband Blaine, and her great-granddaughter Julianne. She is survived by her children Stephen, Bradley, and Julie Ann, their spouses Marilyn Smith Morris, Ranae Sanders Morris, and George F. Whitney, and by 14 grandchildren and 39 great-grandchildren. Funeral services will be held on Tuesday, February 1, at 11:00 AM at the Johansen Park Ward, 565 East 100 South in Logan with a viewing from 9:00 to 10:30. The family requests that everyone wear a mask. Interment will be in the Logan City Cemetery. To access the livestream of the funeral on February 1st at 11 a.m., click on the following link: https://us02web.zoom.us/j/85004436354?pwd=aE5IcGlmT255ZFlBZUtoSUlJZGtZdz09 (password: Helen)

Helen Bradshaw Morris passed away peacefully at home on January 21, 2022 after a long struggle with heart failure. Members of her family were at her side. She was 93. Helen was born on September 18, 1928 in Montwell, UT, on a kitchen table... View Obituary & Service Information

Helen Bradshaw Morris passed away peacefully at home on January...

Send flowers to the Morris family.