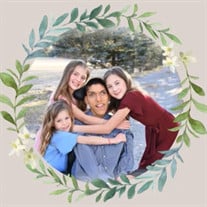 Hestevan Johnston Hennessy, 27 of Avon Utah passed away April 16, 2022. Hestevan was adopted by Matthew and Desiree Hennessy and became their first child in 2002 with his three sisters Ruby, Daisy, & Willow following after. Hestevan was defined by his big brown eyes, brilliant sense of humor, amazing smile, infectious laugh, and radiant spirit. He was always ready for a dance party, live music, construction work, going for a ride in his dad's truck, visiting his papa, or a baseball game. He wove himself into every part of his family as they orbited him for 20 years. They cherished and adored him and all that he added to their family. They had many blessings and amazing experiences because of him. His sisters all had a unique personal relationship with him, and he played his role of big brother perfectly. There weren't many things more fun for him than teasing his sisters. His life was full. Full of family. Full of fun. Full of friends. Hestevan had the ability to connect with people, He easily made his own friends and never forgot them. If Hestevan loved you, he loved you forever. He had many wins and personal accomplishments including helping to turn the keys in Utah to legalize medical cannabis for so many people like him. Hestevan is preceded in death by his Grandpa Don Zufelt, his cousin Joshua Ghiz, Grandma Bessie Talbot, his dear friend Brad Galvez, and his dog Dogavon. Hestevan leaves behind his parents Matthew and Desiree, sisters Ruby, Daisy, Willow, and his dog Indie. His grandparents Tom and Glenda Johnston and Gary and Nancy Hennessy, as well as many cousins, aunts, and uncles that will miss him dearly. Funeral will be held April, 27th 2022 at 1:00 pm in the Barn in Old Paradise 10802 S. UT-165 Paradise Utah.

Hestevan Johnston Hennessy, 27 of Avon Utah passed away April 16, 2022. Hestevan was adopted by Matthew and Desiree Hennessy and became their first child in 2002 with his three sisters Ruby, Daisy, & Willow following after. Hestevan was defined... View Obituary & Service Information

The family of Hestevan Johnston Hennessy created this Life Tributes page to make it easy to share your memories.

Send flowers to the Hennessy family.