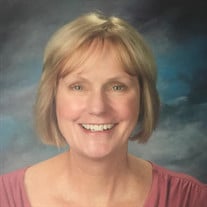 Join Zoom Meeting https://us02web.zoom.us/j/87630495908 Janet Ellis Maw, 61, of Logan, UT, passed away on July 29, 2020 after a long battle with chronic illness. Janet was born to LeGrande and Marilyn Ellis on November 8, 1958 in Stillwater, Oklahoma. Janet spent her childhood in Logan, Utah and was a graduate of Logan High School where she excelled academically and with the drill team. She graduated from Utah State University with a bachelor’s degree in Home Economics Education and Cum Laude honors. During this time she took great satisfaction in her service as the LDSSA Inter-chapter president for all campus sororities. After graduation, Janet began her career in teaching and touched the lives of countless middle school and high school students through her work in schools across Northern Utah. Her commitment to lifelong learning was one of example, as she returned to school to complete an endorsement in English as Second Language and worked towards a Master’s Degree in Education after raising three children. Janet is survived by her sons Ryan Maw (Carly), Dallin Maw (Ashley), and Jaden (Kelsie), grandson (Greyson and Daxton), granddaughters (Finley, Campbell, Hensley, and Holland) as well as many beloved nieces and nephews. She was preceded in death by her parents (LeGrande and Marilyn), Brother (Brent Ellis), and Sister (Julie Haycock). She is survived by her sister LuAnn (Tom Willmore) as well as brothers Clark (Shannon), Scott, Jason (Jessica), and Lance (Haycock). Janet maintained a firm testimony of the Gospel of Jesus Christ and we look forward to seeing her again without the encumbrances of mortality. The family would like to express their heartfelt appreciation to Sunshine Terrace for their loving care of our mom. Based on the recent circumstances surrounding the COVID19 pandemic, we are prioritizing the health and safety of our friends and family. Funeral services will be held at the Allen Hall Mortuary (34 E Center St, Logan, UT 84321, Logan, Utah), but will be limited in attendance to only family members. For those that cannot attend in person, services will be live-streamed and may be viewed at www.allenmortuaries.net Saturday, August 1, 2020 beginning at 11:00 am. Condolences can be offered online at: www.allenmortuaries.net.

The family of Janet Ellis Maw created this Life Tributes page to make it easy to share your memories.

Send flowers to the Maw family.