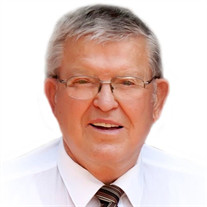 Jay Reed Bindrup, our beloved husband, father, grandfather, brother and friend passed peacefully from this life on February 16, 2020, surrounded by his loving family. Reed was born in Logan, Utah, on August 4, 1931, to Vernon and Vera Bindrup, the second of their eight children. He grew up in Cache Valley with his seven siblings, five brothers and two sisters. A child of the post-depression era, Reed learned the value of hard work at an early age. His understanding of the relationship between work and success served him well throughout his life; work and wise fiscal management became the hallmark of his character. Reed served his country in the Korean War, returning in 1954. He was an active member of the Church of Jesus Christ of Latter-day Saints and served as a missionary in the South Australia Mission from 1955 to 1957. Reed married Karen Weber on September 27, 1957, in the Logan LDS Temple. Their life together was blessed by seven wonderful children; Reed and Karen settled and raised their happy family in Providence, Utah. Reed was a machinist and an entrepreneur. He completed his education and training at Utah State University and Weber State College and became a skilled master-machinist. Reed and Karen started their own business, Reed’s Precision Machine, in 1969. RPM, as it is now known, grew into a full-service, high-tech machine fabrication enterprise. It continues today as a thriving business owned and operated by three of their sons. Even after his retirement, Reed worked at RPM until the age of 85. Reed loved hunting, fishing and the outdoors; he pursued this passion locally and abroad having fished in Canada and Alaska and hunted elk in Mongolia. With his own hands, Reed built a cabin at Bear Lake, where the family still loves to gather. His love for the outdoors and recreation has been passed on to his children and grandchildren who all love and cherish these things because of him. Faith in God and service in the LDS Church were consistent aspects of Reed’s life of purpose. He served faithfully in many Church callings. In their retirement years, Reed and Karen served an 18-month mission to the Polynesian Cultural Center in Laie, Hawaii. Throughout their lives, Reed and Karen enjoyed travel with family. They visited nearly every continent and sailed on over 30 cruises. Reed was a man of simple faith who loved his family, the gospel of Jesus Christ and his country. Reed did his work and lived his life with quietness and consistency. He was not a man of many words, but the message and essence of his life are found, felt, heard and seen in the strength of his character. Gratefully, our bond of love with him is eternal; we are blessed with the assurance that life is everlasting, and we will be together again. Jay Reed Bindrup is survived by his devoted wife, Karen W. Bindrup; their seven children: Cindy (Ned) Miller, Lori (Jim) Hyde, Jed R. (Ann) Bindrup, Shawn W. (Tiffany) Bindrup, Brian L. (Tara) Bindrup, David N. (Sara) Bindrup, and Amy (David) Rawson; and their 33 grandchildren and 18 great-grandchildren. Funeral services will be held at noon on Saturday, February 22, 2020, at the Fruitland Acres Ward Chapel, 464 North 300 East, Providence, Utah. A visitation will be held before the service from 9:30 a.m. to 11:30 a.m. Interment will follow the funeral services at the Providence City Cemetery.

Jay Reed Bindrup, our beloved husband, father, grandfather, brother and friend passed peacefully from this life on February 16, 2020, surrounded by his loving family. Reed was born in Logan, Utah, on August 4, 1931, to Vernon and Vera Bindrup,... View Obituary & Service Information

The family of Jay Reed Bindrup created this Life Tributes page to make it easy to share your memories.

Send flowers to the Bindrup family.