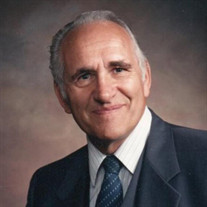 Jay Henry Gubler died peacefully at his home in Riverton, Utah on January 3, 2022 at the age of 95. Jay was born in Paris, Idaho on November 8, 1926 to Ernest Robert and Belle Emeline Gubler. He was the youngest of seven children and was always telling stories about his adventures with friends growing up in Dogpatch (Paris, ID). Before his senior year in high school, he worked a summer for the Boeing company with his older siblings, Adios and Joan. After he completed his senior year of high school, he helped his family move from Paris, Idaho to Smithfield, Utah. In 1944, two weeks before his 18th birthday he joined the Navy. In 1946, after being Honorably Discharged from the Navy, he attended USU and earned an Engineering Degree. While in college, Jay married Evelyn Erickson on Nov. 10,1948 in the Logan Temple. Jay’s career was mostly with the Boeing Airplane Company in Seattle. He became part their Aerospace program and was moved to New Orleans and Detroit, then back to the Seattle area. In the early 70’s, Boeing experienced major cut backs and he was laid off. He found work in Utah in aeronautic Engineering with the RI Corp., designing noise suppressers for jets. After a few years at RI Corporation, he moved to Morton-Thiokol, working in the Space program until he retired. This brought Jay and his family back to Cache Valley. They enjoyed being closer to their families. Jay was very active in The Church of Jesus Christ of Latter-day Saints and held many callings. After retiring he and Evelyn served seven years as host missionaries at the Joseph Smith Memorial Building. They loved guiding tours and meeting people from all over the world. Jay is survived by four of his six children: Jaydene Dazey, Duvall, WA; Bill (&Debbie) Gubler, Riverton, UT; Kaylene (&Ron) Hendrickson, Hermiston, OR; Bruce (&Connie) Gubler and son-in-law Dennis (Dino)Myers, Marysville, WA., and by thirty grandchildren and many great grandchildren. Jay was preceded in death by his parents, Ernest and Emeline Gubler; his brothers, Ervin and Adios Gubler; his sisters, Jean Stelovich, June Perkins, Anna Holen and Joan Gyllenskog; his wife of 70 years, Evelyn Gubler; his daughter Kathryn Myers and her son Wynn Parker; his daughter Janalee Moody and son-in-law Spencer Moody. Funeral services will be held on Saturday January 15, 2022, at 11:45 AM in the old Smithfield 4th Ward Chapel, 179 N. 100 E. Smithfield, Utah. There will be a viewing from 10:30 to 11:30. Burial will be at the Smithfield Cemetery. Services will be livestreamed and may be viewed view the following link: https://us02web.zoom.us/j/81213752102?pwd=R0VtNnkrV3grSytITHFhMlVkWHpoZz09 Password: Gubler

Jay Henry Gubler died peacefully at his home in Riverton, Utah on January 3, 2022 at the age of 95. Jay was born in Paris, Idaho on November 8, 1926 to Ernest Robert and Belle Emeline Gubler. He was the youngest of seven children and was... View Obituary & Service Information

Send flowers to the Gubler family.