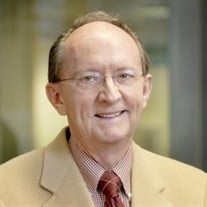 There are no words to fully express the love that we have for our precious husband, father, and grandfather. We adore him, and every day with him was truly a gift. Jay Albert Monson passed away peacefully on the morning of February 24, 2021. He was born May 1, 1938 in Salt Lake City, Utah to Albert J. and Chloe Shaw Monson. He was raised in his beloved Magna, Utah and attended Cyprus High School, where he was elected student-body president. He served a mission for The Church of Jesus Christ of Latter-day Saints in Auckland, New Zealand and loved his many Maori friends. After returning, he graduated from the University of Utah and then received additional degrees from both Arizona State University and Utah State University, along with post-graduate work at New York University. He married his childhood sweetheart, Diana Joy Sandwick, in 1962. Together they had four children prior to her unexpected death in 1970. Jay subsequently met and married Jane Brinton, and together they had five sons. The most cherished thing to Jay was his family. He was totally committed to each of his children and spouses; to him there was nothing more important than his family. A renowned educator, Jay served as a professor of elementary education at Utah State University for 32 years and as department head for 14 of those years. He was named Professor of the Year in 1973 and was deeply involved in the establishment of the university’s extension program across the state of Utah. His work in gifted and talented education and in the construction of the Emma Eccles Jones Education Building is a legacy to his dedication to education and to his love for Utah State University. Jay was an active member of The Church of Jesus Christ of Latter-day-Saints, and he served faithfully in many callings, including bishop, stake president, and sealer in the Logan Temple. He and Jane served a mission in the South Pacific, leading the Church’s International Teacher Education Program. Always a believer in public service, Jay served as chairman of the State Board of Education, a Cache County commissioner, a founding member of the Cache County Council, and a councilman for Logan City. He loved working in the yard, boating, outings at the family cabin, and laughing with his sisters. He enjoyed traveling and supporting his family in their accomplishments wherever they lived throughout the world. His family will remember that he made a hot breakfast for them each school day and that he told epic impromptu bedtime stories. He was a gifted problem solver and was never afraid of hard work or difficult challenges. He was also an avid supporter of the local arts and enjoyed all that Logan, Cache Valley, and Utah have to offer, including Aggie ice cream. Jay was a devoted disciple of Jesus Christ. His faith and testimony never wavered. He loved, taught, and encouraged each person he met. He was an eternal optimist and carried each heavy load with a smile and a kind heart, touching countless people, whose names he never forgot. Jay was preceded in death by his parents; siblings, Elaine (Heber Garside), LaRue (Lee Kirk), and Colleen (Norman Bangerter); and wife Diana. He is survived by his wife Jane; nine children and their spouses: David (Jeanine), Jaylene (Gary Nix), John (Alisa), Jill, Steven (Merrianne), Michael (Toni), Jeffrey (Heidi), Jared (Heather), and Mark (Ali); 35 grandchildren; and one great-grandchild—collectively his greatest treasures in his life. His lifelong motto was “No empty chairs,” and his greatest wish was that he would be simply remembered as a loving husband and father. Funeral services are scheduled for Saturday, February 27, 2021, at 11:00 a.m. Interment will be in the Logan City Cemetery. Services will be livestreamed and may be viewed via the following link: https://us02web.zoom.us/j/88127006587?pwd=Zzd1RmtnZWdRL1NTa3BoTElZbFQ0QT09 Password: Monson The family wishes to express their appreciation to the many doctors and medical professionals and the staff at Birch Creek Assisted Living Center for their wonderful care and concern for our father. The family also wishes to thank the world’s greatest neighbors, Sherm and Becky Conger. As Jay was a lifelong educator and to honor his devotion to education, the family invites contributions to the Jay and Jane Monson Education Scholarship at Utah State University: www.usu.edu/jaymonson.

There are no words to fully express the love that we have for our precious husband, father, and grandfather. We adore him, and every day with him was truly a gift. Jay Albert Monson passed away peacefully on the morning of February 24, 2021.... View Obituary & Service Information

There are no words to fully express the love that we have for...

Send flowers to the Monson family.