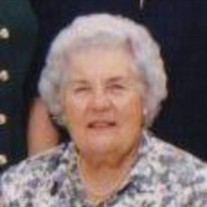 Jean Foy Call successfully completed her last step on the Covenant Path, by enduring to the end, on January 24, 2021. She was born on January 30, 1923 in Twin Falls, Idaho to Leslie Thomas Foy and Florence Howard Tuttle. Her father, Leslie,... View Obituary & Service Information

The family of Jean Audrey Foy Call created this Life Tributes page to make it easy to share your memories.

Send flowers to the Call family.