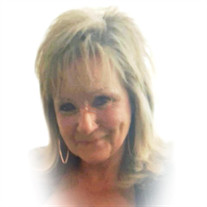 Jean Gilgen Mayer passed on the morning of February 24, 2022 at her home in Logan after a battle with bone cancer. She is survived by her husband of 37 years Rick Mayer, one daughter Wendy and her husband Terry Smith, brother Steven Gilgen and wife Marci from Ogden, and sister Elaine Hagood from Lehi. Jean had four grandchildren and five great grandchildren, TJ Smith and his wife Madi with daughter Charlotte, Shandie and husband Chris Castillo with their daughter Kairi, and Justin Smith and wife Peyton with children Jaxon, Avery and Boston. She was preceded in death by her father Ted Gilgen, her mother Barbara, her brother Gary and sister Gloria. Jean was a caring and giving person who often could be seen around Christmas time at the local Walmart giving money away she had saved up all year to families that appeared to be in need, hoping they could have a better Christmas. She once heard about a little boy who was being teased at school because he had tattered clothing and even though she didn’t know the family, she went down to the store and bought clothes and shoes and then she and Rick left them on the doorstep in the evening, anonymously. This set the stage and the two of them would do this many times. She also gave money to the Food Pantry and was a monthly donor to the St. Jude Children’s hospital, a tradition Rick will continue in her memory for the rest of his life. Family gatherings were important and she really knew how to put out a spread of food everyone enjoyed. This past Christmas, when the Cancer was starting to take its toll, even though she was in severe pain she endured to put out one last Christmas feast for her cherished family. Rick is grateful he had the opportunity to spend the last few hours with Jean where they cuddled, laughed and joked about her hallucinations, which are common at the end of life. Jean hallucinated that she had a room full of people and then turned to Rick asking where they all went. “I chased them away,” he said. They both laughed and then Jean moved on to the next one which happened to be a Who Done It. Nope, they didn’t solve it. She was a wonderful, generous and caring Wife, Mother and Grandmother, and will be missed by those who loved her the lives she touched directly or anonymously. Her final message was, “Why can’t we all just Love Each Other?” Graveside services will be Thursday March 3, 2022 at the Logan City Cemetery at 2 p.m. A viewing will be held prior at Allen-Hall Mortuary 34 E. Center St. from 12:30 – 1:45 p.m. She will be laid to rest and await Rick who will be buried next to her so they can be together for eternity.

Jean Gilgen Mayer passed on the morning of February 24, 2022 at her home in Logan after a battle with bone cancer. She is survived by her husband of 37 years Rick Mayer, one daughter Wendy and her husband Terry Smith, brother Steven Gilgen and... View Obituary & Service Information

The family of Jean Mayer created this Life Tributes page to make it easy to share your memories.

Send flowers to the Mayer family.