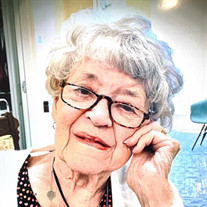 Jean Marie Christensen Showell, 89, of Malad, Idaho passed away on October 4, 2020 in North Logan, Utah. She was born April 30, 1931 in Richfield, Utah to Marlell Lavar Christensen and Jean Cole. In her teenage years Jean was a model for ZCMI department store. She was selected as Miss Burley Idaho and competed in the Miss Idaho Pageant. She graduated from Utah State University with a degree in education, was a member of Kappa Delta Sorority, and an attendant to Junior Prom Queen. In 1953 she was the Utah winner for the "National Make it Yourself with Wool" contest, in which she sewed her own outfit and attended the national contest in Long Beach, California. Jean married John LeRoy (Jack) Taylor in the Logan Temple on September 19, 1952. The couple had three children, John Michael (Mike), Marcia, and Kent David Taylor. A foster daughter, Rose Toledo, joined the family later through the Indian Placement Program. Jack passed away in 1961 following heart surgery. Jean married James C. Miller in 1964 who passed away from cancer six years after they were married. Jean taught home economics for three years at Box Elder High School and six years at Logan High School. In 1974, Jean married Steven E. Showell and moved to Stone, Idaho. The couple had one son, Christian Edward (Chris) Showell. In 1980, the family moved to Malad, Idaho. She worked as the Oneida County, University of Idaho Extension Agent for 16 years. She worked with the 4H program and implemented a mentoring program. In 1989, she earned a master’s degree from Utah State University. From 1999 to 2002, Jean served a full-time mission for the Church of Jesus Christ of Latter-day Saints at the Family History Library in Salt Lake City. She served as a hostess at the Conference Center on Temple Square for several years. Jean was a member of the Oneida Quilters Guild and made many beautiful quilts. She served as the Captain of the Oneida Camp of the Daughters of the Utah Pioneers. She enjoyed painting, gardening, cooking, traveling, and spending time with her family. Jean cared deeply for her family and friends and blessed many lives through her unconditional love and service. The family is deeply grateful for all those who loved and cared for Jean at Maple Springs in North Logan, Utah. Jean was preceded in death by her parents; husbands, John LeRoy Taylor, James C. Miller, and Steven E. Showell; daughter-in-law, Sheryl Taylor; and grandson Kaden Jay Bowman. Jean is survived by her sister Karen (Doug) Ward of Longmont, CO, children Mike (Tamie) Taylor of Sandy, UT, Marcia (Randy) Jensen of Twin Falls, ID, Kent Taylor of Logan, UT, Chris (Sarah) Showell of Malad, ID, foster daughter Rose Toledo of Mission Viejo, CA, 19 grandchildren, and 36 great grandchildren. Funeral services will take place Saturday, October 10, 2020 beginning at 12:00pm at Allen-Hall Mortuary, 34 East Center in Logan, with a viewing prior from 10:30 to 11:30am. Condolences may be expressed online at www.allenmortuaries.net Services will be live streamed and may be viewed via the following link: https://us02web.zoom.us/j/86847178680?pwd=MFZTMjh5WmVRSDFvR3d0MW95UTFWZz09 PASSWORD: Showell

Jean Marie Christensen Showell, 89, of Malad, Idaho passed away on October 4, 2020 in North Logan, Utah. She was born April 30, 1931 in Richfield, Utah to Marlell Lavar Christensen and Jean Cole. In her teenage years Jean was a model for ZCMI... View Obituary & Service Information

The services will be livestreamed via the following link: https://us02web.zoom.us/j/86847178680?pwd=MFZTMjh5WmVRSDFvR3d0MW95UTFWZz09 PASSWORD: Showell

Send flowers to the Showell family.