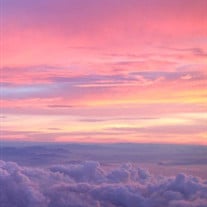 To watch the graveside service live, click on the following link (PASSWORD: Larson) https://us02web.zoom.us/j/84648753173?pwd=V0kwSEpJOElMZnZrU2p2T04zNUZTZz09 Jeanne Foredyce Larson was born January 21, 1925 in Lewiston, Nez Perce County, Idaho. She was the first child of Frank Foredyce and Ivah Paton Foredyce who lived on a small farm/ranch in Asotin County Washington. It was here that Jeanne and her younger brother grew up. Jeanne made friends with every animal on the farm. She especially loved the horses and learned to be a good shot with a pistol. The elementary school Jeanne attended was one and one half miles from her home. This amounted to six miles a day for Jeanne and her younger brother to walk since their mother insisted they come home for lunch. Jeanne loved school and graduated from Asotin High School with very high grades. Jeanne was not able to attend college but she continued to learn. When her first marriage ended in 1944, she had to support her young daughter. She took a secretarial course and eventually became a legal secretary. The attorney she worked for trained her well enough that she wrote the legal briefs for the courts on her own. Her knowledge of the law also helped her as she later worked as a real estate agent in Riverside, California. Jeanne continued to read and learn throughout her life. Whenever she heard a word she didn’t know, she would look up the definition. One of her favorite books among the many she enjoyed was Black’s Law Dictionary. While living in Savannah, Georgia, Jeanne was introduced to the Church of Jesus Christ of Latter-day Saints by a friend. Jeanne listened to the missionaries and was baptized. She gained a testimony of the Book of Mormon and the restoration of the gospel which she would share with others. It was in the Church that Jeanne found her calling in life – doing the genealogical research for her family. Her study of the law helped her as she wrote to county clerks for birth records, marriage certificates and death dates. She visited her relatives to fill out family group sheets and learn stories of her grandparents. Her father was especially helpful to her as he could remember all the family well and could even recall sitting on the lap of his great grandfather. Jeanne was meticulous in her work. She created a file folder for each ancestor on her line which included copies of the records which verified her work, pictures, and a beautifully written life history of their lives which she carefully typed. She was extremely careful with spelling and punctuation. She was very organized in her housekeeping and her personal records as well. In 1972, Jeanne married Donald A. Larsen in Lewiston, Idaho. They were later sealed in the Idaho Falls Temple. Don served in World War II in Japan. Using his GI bill, he and Jeanne went to Brigham Young University in Provo, Utah. Jeanne was not enrolled at BYU but was able to audit classes. This did fulfill her lifelong dream of attending college. While in Provo, Don and Jeanne made friends with a young college student from Japan. She lived in their home for two years. Jeanne and Don loved Yuki (Amy) so much they began to call her their adopted daughter. Jeanne moved to Smithfield, Utah in 2011. She was a very independent person but gradually accepted and appreciated her friends and neighbors who helped her in her declining years. Jeanne died in the Brigham City Community Hospital on December 4, 2020 of causes due to age. She was 95 years old. She is survived by her daughters, Saundra Becker of Oregon and Amy Atondo of California; two grandsons, Patrick Pauley and Bradley Pauley and three great grandchildren. A private graveside services will be held on Wednesday, December 9th at 12:30 PM at the Smithfield City Cemetery.

To watch the graveside service live, click on the following link https://us02web.zoom.us/j/84648753173?pwd=V0kwSEpJOElMZnZrU2p2T04zNUZTZz09

To watch the graveside service live, click on the following link...

Send flowers to the Larson family.