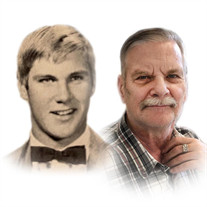 Jeffrey Randall Jensen died suddenly on October 5, 2021, in Washington Terrace, Utah. He was the youngest of six children, born to Ronald and Delores Jensen of Hyrum, Utah, on April 2, 1951. He spent most of his younger years living in Cache Valley growing up on a farm. He loved animals and had pet cats, dogs, rabbits and of course cows. His father was a dairy farmer and most of their days were centered around milking the cows twice a day. Hauling hay, irrigating fields, and tending the crops were all part of the daily routine. Summers were spent getting ready for winters, bottling fruit and vegetables and stocking the barn with hay. His parents were truly kind and industrious people. He attended elementary school in Hyrum, Junior High in Wellsville, and was a graduate from Skyview High School in 1969 where he was active in sports. He played on the football team, and excelled in track where he took second in region with his shotput skills. He also loved baseball and had an impressive knowledge of teams and individual statistics. In high school he sang in the choir and loved to sing his entire life and musicals were his favorite. He served a mission for the Church of Jesus Christ of Latter-day Saints in the Chicago Illinois Mission. Jeff’s mission was cut short, and it was then he started his battle with mental illness, which he fought valiantly until his death. He remained active in the church and held fast to his testimony of the Savior. This mental disease plagued his life and robbed him of his goals and desires to work and have a family, but this did not deter his wonderful sense of humor. Recently he told his phycologist, “I am the best schizophrenic you have ever had!” Despite these difficult challenges, Jeff persevered and most always had a cheerful disposition and positive outlook. Sometimes he would read the encyclopedia, soaking in all sorts of information. He had an excellent memory and someway always seemed to keep track of his favorite sports teams, all sorts of data: batting averages, team rankings, coaches, and game scores. He still remembered the 50 states and their capitals. The latter part of his life he lived in The Terrace at Mt. Ogden nursing home where he enjoyed the meals and friendly care of the staff. Jeff’s family want to thank them and the numerous individuals at Weber Human Services who have assisted and helped Jeff in his life journey. Jeff was preceded in his death by his parents, and his brother Ronald, Jr. (Sherry) of North Glen, Colorado, and he is survived by his sisters Joan (Wayne) Peterson of Salt Lake, Rosemary (Don) White of Logan, Maureen (Gary) Anderson of Providence, his brother Jon (Loretta) Jensen of St. George, and lots of nieces and nephews. In lieu of flowers please contribute to NAMI, or another mental health organization of your choice. Funeral services will be held at Allen-Hall Mortuary on Thursday, October 14th at 11:00am with a viewing prior from 10:00-10:45am. Services will be live streamed and can be viewed via the link below. Funeral live stream link (password: Jensen): https://us02web.zoom.us/j/88099564083?pwd=TGJCY0ZOakhCdC83OGJmR3ZTTmxRQT09

Jeffrey Randall Jensen died suddenly on October 5, 2021, in Washington Terrace, Utah. He was the youngest of six children, born to Ronald and Delores Jensen of Hyrum, Utah, on April 2, 1951. He spent most of his younger years living in Cache... View Obituary & Service Information