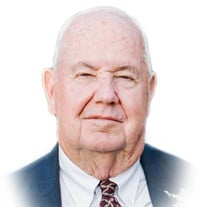 Jerry Lee Olson, 85, passed away peacefully at his home in Hyde Park, Utah on June 2, 2020 due to heart failure. Jerry was born March 17, 1935 in Brigham City, Utah to Raymond H. Olson and Stella Shipley Olson. Jerry married his high school sweetheart, Genevieve Yates Olson right after high school. Their marriage was sealed in the Logan Temple of the Church of Jesus Christ of Latter Day Saints on July 18, 1966. Jerry and Gennie are the proud parents of two boys: Jerry Lynn (Rosetta) and Ronald Ray (Liz). They are survived by their two sons, 9 grandchildren and 20 great grandchildren. Jerry was preceded in death by his brother Clark Olson, and his two sisters, Donnell Olson and Elna (Gibb) Groutage. Jerry joined the United states Army right after marriage and had a distinguished 25 year career. He retired with the rank of Lt. Colonel in 1978. His greatest honor was serving at the Tomb of the Unknown Soldier where he was the 13th guard to serve. Jerry served one tour in Korea and two tours in Vietnam. After his retirement from the military Jerry had a very successful career in Real Estate covering over 40 years in Cache Valley representing Century 21 and then starting his own company “Olson Realty”. Jerry was a true disciple of John Wayne, he loved the outdoors (camping, water skiing, snowmobiling, and any kind of ATV). His dream of owning a piece of heaven came true in 1992 with the purchase of 20 acres above Paris, Idaho. Jerry spent as much time as possible each summer making memories and dutch oven dinners with family and friends. Jerry was an active member of the Church of Jesus Christ of Latter Day Saints and served faithfully throughout his adult life. Jerry’s greatest happiness came from his family, serving the young men in scouting and in filling assignments as an ordinance worker in the Logan Temple for over 10 years. Jerry was a storyteller, a big tease, and always had a good joke or saying to share. Some of his favorites were: “Be good or I will cut your ears off.” ; “Keep your grubby hands off.” ; “It takes a big pig to weigh a ton.”; and at the end of his life, “If it doesn’t hurt it doesn’t work.” There will be a funeral service for family members on Wednesday, June 17th at 11:00 am at the Hyde Park 10th Ward Chapel and two viewing for friends to to pay their respect on Monday, June 15th from 6:00 - 8:00 pm and Tuesday, June 16th from 6:00 - 8:00 pm at Allen Hall Mortuary located at 34 East Center St, Logan, Utah. Visitors are encouraged to follow current state guidelines regarding Covid 19 by wearing masks and remaining 6 feet apart. Jerry will be buried at the Hyde Park Cemetery with military honors. In lieu of flowers the family asks for contributions to be made to The American Cancer Society or St. Jude’s Hospital.

The family of Jerry Lee Olson created this Life Tributes page to make it easy to share your memories.

Jerry Lee Olson, 85, passed away peacefully at his home in Hyde...

Send flowers to the Olson family.