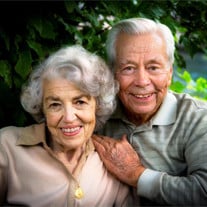 Our dear wife, mother, grandma, aunt, cousin and friend, Jocie Marie Duncan Jordan (98) passed away peacefully Saturday, May 30, 2020. Marie was known for her extraordinary kindness, unconditional love, pure faith and her beautiful smile. She had a remarkable memory and could remember the names (and most birthdays) of all of her children, grandchildren and great grandchildren. She dearly loved her family. Marie was born September 27, 1921 in Lobelville, Tennessee, the second and last child of Robert Chester Duncan and Clara Maybelle Baugus. When Marie was two, her family moved to Akron, Ohio where she graduated from North High School in 1940. It was at graduation practice that Marie met her lifelong and eternal companion, William Walter Jordan Jr. (Bill). Bill and Marie were married December 24, 1942 in Akron, Ohio during Bill's final Army leave before he shipped overseas for three years of military service during WWII. Their love story is legendary. Bill and Marie were baptized as members of The Church of Jesus Christ of Latter-day Saints on June 29, 1957. They were sealed for eternity in the Los Angeles Temple on September 17, 1958. Marie served faithfully in numerous church callings and worked diligently on family history. Bill and Marie moved many times over the years and Marie kept in touch with innumerable friends and relatives throughout her life. She touched lives and was loved by everyone she met. Marie is survived by her husband, Bill, 5 of her 7 children: Linda (Wayne) Jeffrey, Laurie (Alan) Gibby, Pam (John) Johnson, Jimmy (Ruthie) Jordan, Julie (Blair) Buswell and by 36 grand-children and 66 great grand-children. She was preceded in death by her parents, her brother Robert, her two sons Bill (Marlys) and David Jordan, by her grandson William Nephi Johnson and by two great grandsons, Gabriel Benjamin and Reese Aaron Jordan. There will be a celebration of Marie's life at a later time when all of her loved ones can gather. The family wishes to express gratitude to the workers at Sunshine Terrace and to Kayleigh Andrus "adopted grand-daughter", who lovingly cared for Marie during the final years of her life.

The family of Jocie Marie Duncan Jordan created this Life Tributes page to make it easy to share your memories.

Send flowers to the Jordan family.