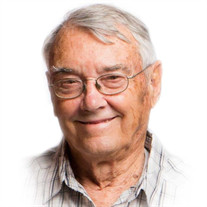 Our father, grandfather, great-grandfather and friend John Paul Riley passed away peacefully at Legacy House of Logan with his oldest son David at his side. He was 94. Paul was born to Winnefred and John Edward Riley in British Columbia, Canada. The oldest of three children, he grew up working on the family farm and attending elementary school at the one-room schoolhouse in Celista supplemented by lessons from his mother, a classics scholar trained in Greek and Latin. As a young man, he herded sheep in the mountains above his family farm and completed high school via correspondence courses. Education and hard work were priorities for Paul and he was accepted to the University of British Columbia where he graduated with a BS in Agricultural Engineering in 1950. He was then accepted to the graduate program at Utah State University and arrived in Logan to study under Dr. O.W. Israelsen. Paul caught the eye of Dr. Israelsen’s assistant Dorothy Everton, who would say later that “the Lord brought him to me, and the two were married June 1, 1952. Paul was baptized a member of the Church of Jesus Christ of Latter-day Saints in 1955 and He and Dorothy were sealed in the Logan, LDS Temple in 1956. The couple then spent several years back in British Columbia where Paul served as a water rights engineer for the Canadian government. He took a teaching position at Oregon State before they returned to Canada where they adopted the three of their four children. They returned to Logan in 1963 and Paul completed his PhD in Civil and Environmental Engineering in 1966. Paul and Dorothy adopted their fourth child and Paul began a teaching and consulting career at USU which continued until his retirement in 1993. Paul served in multiple callings for the LDS Church including Bishop of the Northwood Ward, 2nd Counselor for the Cache Stake, and the positions he most enjoyed, Young Men’s President and Counselor in the Cache Stake Young Men's Presidency. Following his retirement from USU, he and Dorothy completed a service mission where Paul oversaw the upgrading of water systems at church properties and camps. He loved his involvement with the Boy Scouts of America and was a recipient of the Silver Beaver award. He was a longtime member of the Kiwanis Club of Logan, The Sons of the Utah Pioneers, Cache Historical Society and the American Society of Civil Engineers. He was a founding member of the Utah Section of the American Water Resources Association and served a term as president. In recognition of his dedication to students and sharing knowledge, the AWRA instituted the annual J. Paul Riley Student Paper Competition which awards scholarships to undergraduate, graduate and doctoral students in Utah who effectively communicate their research through writing and presentations. Paul’s university consulting work on water projects took him to locations around the world including China, Pakistan, Central and South America and west Africa. His family accompanied him on extended trips to Montreal, Mexico, India and Egypt. His pioneering work at the Utah Water Research Laboratory combining analog and digital models of hydrological systems opened significant new research opportunities at the UWRL. The family enjoyed summer trips to Celista to visit grandparents and swim and fish in the Shuswap. Paul and Dorothy loved the arts and were avid supporters of The Lyric Theater and Utah Festival Opera. Paul is preceded in death by his parents, sister Pam, wife Dorothy and grandson Brooks Green. He is survived by his brother Peter and Eva of Austin, Texas, son David and Holly Riley of Draper, Utah, daughter Pam and Bill Green of Heber City, Utah, son, Steven and Kelle Riley of Port Townsend, Washington, and daughter Heather Riley and Brian Fryer of West Jordan, Utah. He will be greatly missed by his grandchildren, Kolby, Kestle, Whitney, Samantha, Katelyn, ​ Emma and Olivia and great-grandchildren; Kaedynce, Kinley, Kaeton, Bodhi, Baker, Palmer and Riley. A viewing and reception will be held Thursday evening, July 8th from 6-8pm at the Allen-Hall Mortuary, 34 East Center Street in Logan and from 10-11:30 am prior to funeral services at noon in the LDS Ward Chapel 502 East 300 North, Logan. Interment in the Logan City Cemetery. Condolences and memories may be shared online at www.allenmortuaries.com Services will be livestreamed and may be viewed via the following link: https://us02web.zoom.us/j/89199748698?pwd=RStjTEJlQmdRdVplZ1RHdWFJbWVOdz09 Password: Riley ​Donations in Paul's name may be made to a scholarship fund he established at USU's College of Civil and Environmental Engineering at: usu.edu/jpaulriley

Our father, grandfather, great-grandfather and friend John Paul Riley passed away peacefully at Legacy House of Logan with his oldest son David at his side. He was 94. Paul was born to Winnefred and John Edward Riley in British Columbia, Canada.... View Obituary & Service Information

Send flowers to the Riley family.